When a liquid remains exposed to air its volume decreases gradually. This is because of an evaporation. During this process, some of the surface liquid becomes vapor or gas, and mixes during air with the gases. Thus, it is said to evaporate when a liquid turn into vapour or gas. Evaporation is influenced by many factors.

Due to the evaporation of the water in them the wet clothes dry. And rainwater puddles driver as well, due to water evaporation. The evaporation process also reclaims common salt from seawater.

To understand this, we will need to know each of this in detail. 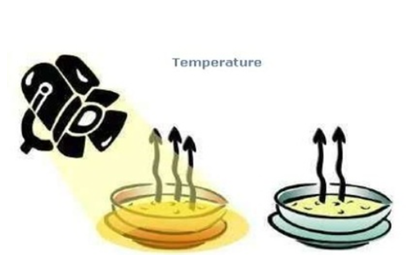 Surface area of the liquid – 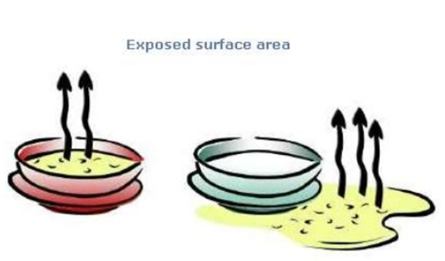 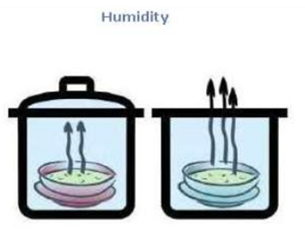 When air humidity is low, then evaporation rates are high, and water evaporates more readily.Under these circumstances, our body’s sweat evaporates readily, and we feel comfortable and cool.Under low air humidity conditions, the wet clothes dry quickly.When air humidity is high, then evaporation rate is low, and water evaporates very slowly. In the later part of summer, the humidity of air increases. People sweat a lot in such weather. But the sweat from our bodies does not evaporate readily due to high humidity of air. Such weather becomes muggy and we feel hot and uncomfortable. This type of weather is experienced during cloudy days in the rainy season and in areas close to the sea. The wet clothes take a long time to dry when the humidity of air is high.

The rate of liquid evaporation increases with increased wind velocity. As the wind speed increases, the water vapor particles travel along with the wind, reducing the volume of ambient water vapour. That raises the rate of water evaporation. On a windy day, the washed wet clothes dry faster, because evaporation is faster due to high wind speed.