Ecosystem | Components of an Ecosystem

These include the Physical Environment like Soil, Water, Air and Physical factors and Climatic factors like Temperature, Light, Humidity, Pressure.

This comprises of a community of organisms (Plants and Animals) made up of many inter-dependent populations. Producers, Consumers and Decomposers are 3 types.

Also called Autotrophic organisms as they produce their own food from simple inorganic substances like Carbon Dioxide and Water by using Sunlight Energy in the presence of Chlorophyll.  Examples are Green Plants and Blue Green Algae.

These Organism consume (eat food) prepared by Producers.  All organisms are consumers.  From Microscopic organism like Protozoa to Man.  Food produced by plants is directly consumed by animals like Goats, Cattle, Antelopes etc.  These animals are referred to as direct consumers.  These animals are then eaten or consumed by other animals like Dogs, Big Cats and Humans, which obtain their energy indirectly by eating the animals. Consumers are divided into 3 categories.

The Categories of Consumers are Herbivores, Carnivores and Omnivores 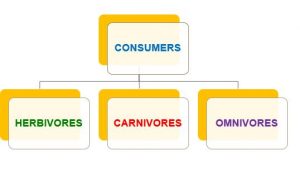 These rely on both Plant and Animals for their food source.  In other words, they eat both plants and meat

Organisms like Bacteria and Fungi which are incapable of producing their own food, live off the dead and decaying plant and animal bodies.

Importance of Decomposers:  They play a vital role in Decomposing plant and animal bodies and act as cleansing agents of the Environment.  The nutrients they absorb into their system is returned back to the soil, which is then used by plants for manufacturing their food.

Decomposers help by continuing the process of the Cycle of Life and Death.  If they were not present then all Plant and Animal life would cease to exist.  Hence, Evolution would not take place.