CONTROL AND COORDINATION IN ANIMALS

The process by which different parts of the body function together to carry out a function.  For a person to lift an object, there has to be coordination from the Brain to the arm and hands instructing them to lift the object.

For coordination and functions to be carried out, there has to be control over the actions and reactions 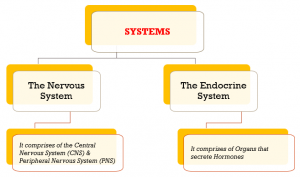 The Central Nervous System includes the Brain and Spinal Cord.

The brain and spinal cord are protected by bony structures, membranes, and fluid. The brain is held in the cranial cavity of the skull and it consists of:

Cerebrum, Cerebellum, and the Brain Stem. The nerves involved are Cranial nerves and Spinal nerves.

The Peripheral Nervous System is made of  Nerve Fibers that spread out from the Spinal Cord and connect to all parts of the body and help carry and relay messages.

The Endocrine System comprises of glands called Endocrine Glands and Exocrine Glands. A gland is a structure that secretes a specific substance or substances for a particular activity.  Endocrine Glands produce Hormones  (Chemical Substances which are secreted in small amounts directly into the blood stream(secretion is internal) by specialized tissues in the body that coordinate the activities and growth of living organisms).  Hormones are chemical messengers that are produced in one part of the body, but act on a different part.  Exocrine Glands on the other hand produce and secrete into tubes or ducts, meaning their secretion is external.

HOW DOES COORDINATION TAKE PLACE

There are Five (5) sense organs in our Body –  Eyes, Nose, Ears, Tongue and Skin, each having a specific function.  Each organ has specialized sensory cells called Receptors.

These are sensitive and responsible to the actions around us and our surroundings.  Anything that affects our senses is a called a Stimulus (Heat, Cold, Sweet, Salty, Loud, Bright, Soft, Hard etc) and are detected by these Receptors.

The Receptors are connected by nerve fibers that transmit or conduct the message (stimuli) through nerve impulses to the Spinal Cord and Brain in the form of Electrical Impulses.

An Effector (mainly muscles and glands) is a part of the body that responds to the stimuli accordingly to the instructions sent by the Nervous System) Brain and Spinal Cord.  The Effector muscle or gland in question, then responds to the Stimulus.

Function of the nervous system

Any activity we do or carry out is coordinated by the Nervous System, be it thinking, breathing, eating, exercising or sleeping.  It receives messages from its surroundings and interprets them and then responds accordingly.

Think of it as a Wire conducting electricity from one point to a next.. Similarly, our body is made of Billions of strands of the wires (Neurons) that convey impulses to our Brain and Spinal Cord

Anatomy of the Nervous System

PARTS OF A NEURON

Parts of a Neuron

The Cell Body is the roughly round part of a neuron that contains the nucleus, mitochondria, and most of the cellular organelles.

Small tree-like structures called Dendrites extend from the cell body to pick up stimuli from the environment, other neurons, or sensory receptor cells.

Long transmitting processes called Axons extend from the cell body to send signals onward to other neurons or effector cells in the body.

Function of the neuron

When a single neuron in an Effector detects a Stimulus, the Receptor sends a signal or impulse to the Dendrites which are connected to the Axon, which in turn relays the message to a next Neuron.  Between each neurons is a gap called a Synapse.

This gap contains a chemical substance called a Neurotransmitter, present only on one side of the gap.  Synapses act and behave like a one way street, where impulse from a neuron can only be relayed in the direction the chemical substance is present.  Its in this way that impulses from millions of neurons are relayed to the Brain and Spinal Cord.

ORGANS OF THE NERVOUS SYSTEM 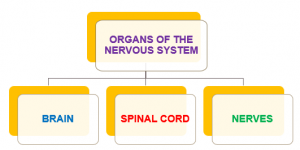 A soft, wrinkled organ that weighs about 3 pounds, is located inside the Cavity, where the bones of the skull surround and protect it. The approximately 100 billion neurons of the brain form the main control center of the body. The brain and spinal cord together form the Central Nervous System (CNS).

A long, thin mass of bundled neurons that carries information through the vertebral cavity of the spine beginning at the medulla oblongata of the brain on its superior end and continuing inferiorly to the lumbar region of the spine. 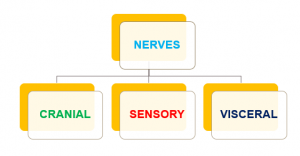 All 3 Nerves (Cranial, Spinal and Visceral) are of 2 types:

Sensory Nerves:  These carry impulses from the body parts to the Spinal Cord and Brain.

Motor Nerves:  These carry impulses from the Brain and spinal Cord to the  parts of the body that require action.

Example of how a reflex  action takes place

What will your reaction be if you were to touch a surface without realizing it was Hot.

When you touched the Hot surface, you Immediately withdrew your hand as if something burnt you or stung you.

What took place was that your hand, which has sensory cells called Receptors (cells responsible for picking up any stimuli), touched the hot surface Stimulus (anything that affects our senses or any part of our body). Nerves called, Dendrites, which are attached to the Receptors receive this impulse. An Impulse was sent via the Axon (nerve fibers along which the message is relayed). This is relayed to the Dendrite of another Neuron through a space called a Synapse (gap that separates Two (2) neurons).  This process of sending electrical impulses continues from the dendrite of one neuron to the next, till they reached the nerve endings attached to the Spinal Cord and were relayed to the Brain, which interpreted the Stimulus to be a hot object.  As a result the Brain relayed the message back to the hand, and your Response or was to withdraw your hand. This is called an Reflex Action (an automatic response to a stimuli).

For all actions to take place by the Human Body, it needs to be Controlled and Coordinated  by nerves that branch out from the Central Nervous System and are responsible for sending and receiving Electrical signals (impulses).

Organs that are under the control of the Brain are called Cerebral Organs.  When there is an impulse sent or received by the Brain, the Cranial Nerves are responsible for transmitting these impulses in order for the organ to respond.  This is known as a Cerebral Reflex, and only takes place with the organs connected or under control of the Brain, 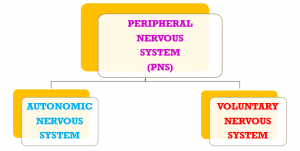 This system is responsible for controlling all the organs and activities within or inside our body without any voluntary action.  This means that this type of a system is Automatic.  Breathing, Heartbeat, Sneezing are examples and actions that are not forced.

All the nerves are connected to the organs in our body, and by means of coordination and control, automatic responses take place within the body.

This is made up of the Brain and Spinal Cord and is responsible for the overall Control and Coordination within and outside the body.

This is the largest Coordinating

in the body and is responsible for the day to day activities within our body and its surroundings.  It carries out all the processes in relation to Control and Response.

The brain is protected by the skull called the Cranium and is surrounded by 3 membranes called the Meninges.  The space between these meninges is filled with a fluid

to protect it by cushioning it and protecting it from Mechanical shocks.

The Brian is divided into 3 parts, namely – Fore Brain (Cerebrum), Mid Brain and Hind Brain (made of 3

FORE BRAIN (Cerebrum) is the main thinking part of the Brain and is responsible for carrying out activities like Learning, Reasoning, Personality, Memory, Intelligence etc.  It also carries out processes like thoughts, sensations, actions and movements.

MID BRAIN is responsible for controlling Reflex Movements of the Head, Neck and Back Bone.  This movement is brought about Visually (Seeing or Sight) and Auditorily (Hearing) according to the nature of the stimuli and then responding to it.  When we see near or distant objects or hear different types of sounds.

HIND BRAIN This is divided into 3 parts – Pons, Cerebellum and Medulla.

a.Pons is responsible for the regulation of Respiration, be it Aerobic or Anaerobic

b.Cerebellum helps in maintaining Posture and Balance.  How we stand, walk, pose, lift an object, run, move an object, etc

c.Medulla controls all internal actions that are not Voluntary.  Breathing, Sweating, Digestion, Circulation, Control of Heart Beat etc are some actions that are done automatically.  It also controls reflexes like sneezing, coughing, vomiting etc.

This is a Cylindrical structure that begins from the base of the Medulla and extends downwards.  It is enclosed by tiny bone structures called Vertebrae and is also surrounded by membranes called the Meninges .

The function of the Spinal Cord is to coordinate Spinal Reflexes and conduction of nerve impulses to and from the Brain.

When any stimuli is detected by a Receptor, the impulse is sent via the Spinal Cord to the Brain, which then interprets and relays he message back to the Spinal Cord for the necessary action to take place.

This System works in Coordination with the Central Nervous System and is responsible for the functioning of Organs within our body. They do so by releasing Chemicals called Hormones.

These are Chemicals secreted by hormonal glands into the blood stream upon directions of the Brain.

Each Hormone has a particular role to play, according to the nature of the stimulus in our surrounding.  Hormones are involved in the regulation of several functions within the Human Body like Growth, Reproduction and Metabolic activities.

We know that Hormones are secreted by Glands within our body.  Each gland secretes a particular hormone for a particular purpose.

Some of the Glands responsible for the functioning and well being  of the human body and the Hormones secreted by them are: 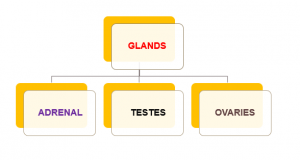 Present below the Brain and secretes a number of Hormones like the Growth Hormone, responsible for the growth of the human body.  Too much release of this hormone results in the individual being a Giant, too less, the individual becomes a Dwarf.

Attached to the wind pipe and produces a hormone called Thyroxine, which contains the Chemical Iodine.  Deficiency  of Iodine results in a disease called Goiter (swelling of the Neck).

Lie in the lower part of the Neck and upper part of the Chest. They secrete the Thymus Hormone that helps in the development of the Immune System.  This gland is large in children but shrinks during sexual maturity.

They secrete Insulin which lowers the level of blood sugar or blood glucose level.  Insulin controls the Metabolism  of sugar in the body.  If the pancreas do not produce sufficient insulin then the blood sugar level rises and then results in a disease called Diabetes.  This means that there is too much sugar in the blood.  Insulin helps control this.

These are the male organs and produce Testosterone, a hormone that controls the development of male sex organs and features such as voice, facial hair and also produce the sex gamete called sperms.

These are the Female organs and produce 2 hormones called  Oestrogen and Progesterone.  Oestrogen is vital for the development of the female sex organs and features like voice, skin type, mammary glands whereas Progesterone controls the changes of the Uterus in the Menstrual Cycles

When there is an excess or less secretion of hormones in the blood stream can lead to a Body suffering from diseases.  Eg. Lack of Isulin can lead to Diabetes and too much can lead to a Coma.  As a result, the right amount of hormone must be secreted at the right time for the proper functioning of the body.  The amount and timing of release of hormones is called the Feedback Mechanism.