Class 10 Geography Chapter 4 Agriculture covers all Extra Questions and Answers of various types i.e. from short questions to long questions, related to the topic so as to help the students with their preparation by helping them do an in-depth study of the topic.

Class 10 Geography Chapter 4 Extra Questions are Answered in detail by our team of experts which includes teachers and professionals. These solutions have been compiled in an easy to understand manner, keeping in mind, the perspective of strong, and weak students. We are providing NCERT Solutions for Class 10 all subjects which can be accessed by clicking here.

Ques.1: On which factors does primitive subsistence agriculture depend?

Ans.1: Primitive subsistence agriculture depends on monsoon, natural fertility of the soil and suitability of other environmental conditions to the crops grown.

Ques.2: Which are the major cropping seasons in India?

Ans.2: The major cropping seasons in India are Rabi, Kharif and Zaid.

Ques.3: Which are the main characteristics of commercial farming?

Ans.3: The main characteristics of commercial farming include:

Ques.4: What is plantation agriculture?

Ans.4: It is a type of commercial farming. In plantation agriculture, one single crop is grown over a large area for commercial purposes. In the process of cultivation, large machines are used and it is highly capital intensive.

Ans.7: The important beverage crops in India are tea and coffee.

Ans.8: The production of silk fibres by the rearing of silkworms is called sericulture.

Ques.9: Which are the major non-food crops grown in India?

Ans.9: The major non-food crops grown in India are rubber, cotton and jute.

Ques.10: What was the main focus of the First Five Year Plan?

Ques.11: Why is the stagnation of agricultural sector problematic for the economy?

Ans.11: As agriculture and industry go hand in hand, any stagnation in agriculture would lead to problems in other sectors of the economy. It may cause unemployment or lower production levels.

Ques.1: Why is agriculture an important economic activity?

Ans.1: Agriculture is an important economic activity for the following reasons:

a) Rabi: This cropping season lasts from October to June. The crops are sown in October-December and harvested in April-June. Major rabi crops include wheat, barley, peas, gram and mustard. Major production of rabi crops takes place in states of Punjab, Haryana, Himachal Pradesh, Jammu and Kashmir, Uttarakhand, and Uttar Pradesh. These crops require precipitation during the winter months.

c) Zaid: This is a short cropping season between rabi and Kharif seasons. Major crops include watermelon, muskmelon, cucumber, vegetables and fodder crops.

Ques.1: Give a detailed account of primitive subsistence agriculture.

Ans.1: Primitive subsistence agriculture is the oldest form of agriculture practised in the world. It is still practised in some parts of the world. The main purpose of this type of agriculture is subsistence. It is practised on small patches of land. The tools used for cultivation are also primitive, for example, digging sticks, hoe and dao. There is no additional labour required other than family labour. Primitive agriculture is mainly dependent on monsoon, natural soil fertility, and suitable environmental conditions. It is also known as slash and burn agriculture as in this, a small patch of forest land is cleared for cultivation. The ash resulting from the burnt trees serves are a fertile base to grow crops. Once the land loses its fertility, another patch of land is cleared and the same process is repeated. This method allows the land to rejuvenate its fertility naturally. It is known as jhumming in north-eastern states like Assam, Meghalaya, Mizoram and Nagaland, pamlou in Manipur, dipa in Bastar district of Chhattisgarh, and Andaman and the Nicobar Islands. 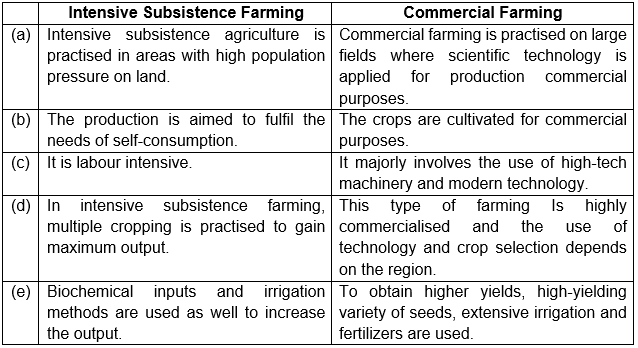 Ques.3: Give a description of millets.

Ans.3: Millets are a group of crops which include jowar, bajra and ragi. These are coarse grains with very high nutritional value. Jowar is one of the most important crops. It is a rainfed crop and does not require irrigation in moist areas. It is cultivated in the states of Maharashtra, Karnataka, Andhra Pradesh and Madhya Pradesh. Bajra is another important crop. It is grown on sandy soils and shallow black soil. Major states cultivating bajra are Rajasthan, Uttar Pradesh, Maharashtra, Gujarat and Haryana. Another millet grown in India is ragi. It is cultivated in dry regions with red, black, sandy, loamy, and shallow black soils. Ragi is cultivated in Karnataka, Tamil Nadu, Himachal Pradesh, Uttarakhand, Sikkim, Jharkhand and Arunachal Pradesh.

If you have any feedbacks on Agriculture Class 10 Geography Chapter 4 Extra Questions and Answers please write us on comment box.