Class 10 Civics Chapter 2 Federalism covers all Extra Questions and Answers of various types i.e. from short questions to long questions, related to the topic so as to help the students with their preparation by helping them do an in-depth study of the topic.

Class 10 Civics Chapter 2 Extra Questions are Answered in detail by our team of experts which includes teachers and professionals. These solutions have been compiled in an easy to understand manner, keeping in mind, the perspective of strong, and weak students. We are providing NCERT Solutions for Class 10 all subjects which can be accessed by clicking here.

1) Which country’s constitution’s key feature was to reduce the power of the central government and give powers to the regional government?

3) Name one country which has a unitary form of government.

4) ________ is a system of government where power is divided between a central authority and various constituent units of the country.

6) Under ______ system either there is only one level of government or the subunits are subordinated to the central government.

9) What are the two different types of a federation?

11) After Independence and several princely states becoming a part of the country, the constitution declared India as a _______.

12) Name any three subjects of national importance which are included in the union list.

13) Name three subjects of local importance and are included in the state list.

14) Powers of subjects like computer software which came up after the constitution was made reside with the union government subjects known as ________.

15) Name any states of India which enjoy special powers because of their particular social and historical circumstances.

16) Which article provides special powers to states like Arunachal Pradesh, Nagaland etc. because of their particular social and historical circumstances.

18) _______ plays an important role in overseeing the implementation of constitutional provisions and procedures.

20) Name two states which were created based on culture, ethnicity, or geography and not on a linguistic basis.

21) Besides Hindi, there are _______ languages recognized as scheduled languages by our constitution.

22) Name the language which is spoken the most after Hindi.

23) All the panchayat samities and mandals in a district together constitute the ________.

25) Who administers a district and what is the other name he is known as?

26) Which state of India has its constitution?

1) What is federalism and what are the two levels of government under it?

Ans) Federalism can be defined as an arrangement of government in which the power is distributed between the central authority and various constituent units of the country. It has usually two levels of government both of which enjoy individual power. The two governments are:

2) What are the two kinds of roots through which federation are formed?

Ans) There are mainly two kinds of roots through which federations are formed. They are as follows:

India comes under which type of federation and why? (CBSE 2014)

Ans) In case of a coming together federation, all constituent states customarily have equal power and are strong concerning the federal government.

In a joining together federation the central government inclines to be more powerful concerning the states i.e. often different constituent units of the federation have unequal powers and some units are granted special powers.

4) What is the three different types of federalism practised in India?

Ans) Originally our constitution provided only a two-tier system which consisted of the Central or Union government and state governments. However, later a third tier was added consisting of the municipalities and the panchayats. All these three tires enjoy separate jurisdiction and a clear distribution of power.

Describe the three forms of power-sharing among different organs of government in India. (CBSE 2014)

Ans) The three-fold distribution of legislative power between the union government and the state government as provided by the constitution contains three lists mentioned as follows:

Union list: This list has a power related to subjects of national importance like that of finance, defence etc. and the power of decision-related to this subjects lies with the central government only as a unified policy system is required for all these subjects.

State list: This list provides powers related to subjects that are of local importance like agriculture, trade commerce etc. and these powers lies with the state government.

Concurrent list: This list provides powers related to subjects like marriage, forests etc. and decisions related to these subjects can be taken by both central and state government.

6) What do you mean by a coalition government?

Ans) When none of the leading political parties can secure their ruling position alone then two or more than two parties come together to form a political alliance which can be termed as a coalition. For example, our current government led by BJP is also a coalition of the head party along with 45 other parties.

7) State two reasons which enable us to call India a federal nation.

Ans) India is a federal nation and we can call it so because of the following reasons:

8) What do you mean by decentralization? What was the condition before the 1992 constitutional amendment?

Ans) When a certain set of powers are taken away from the central and state governments and are provided to the local government then this process of giving and take is known as decentralization.

Before the constitutional amendment of 1992 provisions for conducting regular timely elections were not present. Also, the local bodies did not possess any individual powers and were dependent on state and central government for complete aid.

9) Give a hierarchical representation of the rural or local self-government in India. 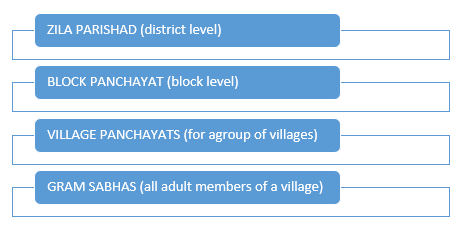 10) What are the dual objectives of a federal government?

Ans) The federal system of government has dual objectives. They are as follows:

11) What other factors besides politics keep the federations united? (CBSE 2015)

Ans) Apart from politics, there are other factors which help in keeping the federations united. Few of them are culture, ideology and history. Culture of trust, cooperation, mutual respect and restraint has also facilitated in the even functioning of nations. Apart from these, language also plays a very crucial role in keeping federation united especially if a language policy like that of India is adopted.

1) Mention any 5 key features of the federal form of government.

Ans) The following are the features of a federal government.

2) State 4 important feature of the language policy of India.

Ans) In 1947 the boundaries of different states of our country were remarked on a linguistic basis. India’s language policy has certain features which are mentioned below:

3) State 4 steps that were taken to make the third tier of democracy stronger in the year 1992.

Why is decentralization favoured in a democracy? Identify any two reasons. (CBSE 2014)

Which four provisions of the constitutional amendment of 1992 strengthened the third tier of democracy in India? Explain. (CBSE 2015, 2013, 2012)

Ans) Before the 1992 constitutional amendment, the third tier i.e. the local governments consisting of panchayats and municipalities did not have their powers however in 1992 after the decentralization took place the following steps were taken to improve their status.

4) Explain the structure of the new Panchayati Raj institutions

If you have any feedbacks on Federalism Class 10 Civics Chapter 2 Extra Questions and Answers please write us on comment box.