Everything around us performs motion and to do this, it needs some kind of force. These forces exist in various forms. They can be pushing, pulling, lifting, stretching, twisting or pressing forces and every moving body around us is doing motion with the help of these forces. These forces can be of two types – balanced and unbalanced forces.

Let us start looking at this classification type in more detail one by one.

If the resultant of all the forces acting on the body is zero, the forces are called balanced forces.

A body under the action of balanced forces does not change its position of rest or of uniform motion with respect to time and it appears as if no fore is acting on it. Let us look at some examples.

Suppose a heavy box is lying on the ground. Let us push this box with our hands. We find that the box does not move and remains in its state of rest though as many as four forces are acting on it. The four forces acting on the box are: 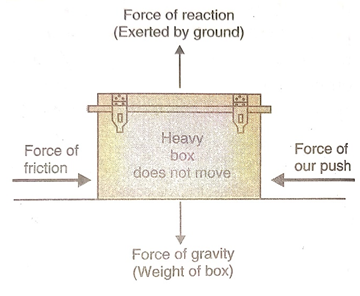 Though balanced forces cannot produce motion in a stationary body or stop a moving body, they can, however, change the shape of the body.

If the resultant of all the forces acting on a body is not zero, the forces applied on it are called unbalanced forces.

Let us look at an example. Suppose a toy car lying on the ground. Let us push this car with our hand. We find that the toy car starts moving. Now, in this case also four forces are acting on the toy car. These are: 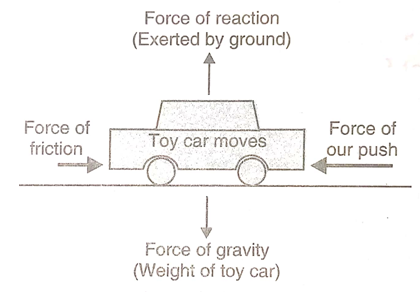 In this case also, the force of gravity on the car acting downwards and the force of reaction of ground acting upwards are equal and opposite, so they balance each other. Now, due to the wheels of the toy car, the opposing ‘force of friction’ is much less here. The force of our push is, therefore, greater than the force of friction in this case, so they cannot balance each other. Thus, the resultant of all the forces acting on the toy car is not zero. There is a net unbalanced force acting on the toy car which makes the car move from its position of rest. The toy car moves in the direction of greater force which is the direction of our push. Thus, to move a stationary object, we have to push it with a force greater than the opposing force of friction.

It was Galileo who said that the objects move with constant speed when no force acts on them. Whenever we talk of force acting on a body, it usually means an unbalanced force.

An object experiences a net zero external unbalanced force. Is it possible for the object to be travelling with a non-zero velocity? If yes, state the conditions that must be placed on the magnitude and direction of the velocity. If no, provide a reason.

Yes, it is possible for an object experiencing a net zero external unbalanced force to travel with a non-zero velocity. The following conditions must be placed on the motion of the body –