According to MR-MC approach, producer’s equilibrium refers to the stage of that output level at which –

We know that MR is the addition to TR from sale of one additional unit of output and MC is the addition to TC for increasing production by one unit. The aim of every producer is to maximize profits. To achieve this aim, the firm will compare its MR and MC. Profits will increase as long as MR exceeds MC and the profits will fall if MC is greater than MR. So, producer equilibrium is not achieved when MC<MR as there is scope to increase profits. The producer will also not be in equilibrium when MC>MR because the benefit is less than the cost. It means the firm will be at equilibrium when MC=MR.

2. MC is greater than MR after MR=MC output level 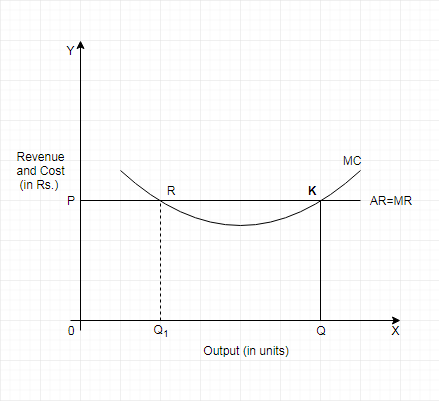 In the figure given above, output is shown on the x-axis and revenue and costs on the y-axis. Both AR and MR curves are straight line parallel to the x-axis. MC curve is u-shaped. Producer’s equilibrium will be determined at OQ level of output corresponding to point K because only at point K, both the conditions are met.

Although MR-MC is satisfied at point R, it is not the point of equilibrium since the second condition, that MC be greater than MR after MC=MR, is not satisfied.