Returns to a Factor

Returns to a factor refers to the resultant increase in the total product (return) when only one factor is increased, keeping all other factors fixed. In the short run, when one input is variable and all other inputs are fixed, the firm’s production function exhibits the law of variable proportions. The law of variable proportions is one of the most important laws of production. It shows the nature of the rate of change in output due to a change in only one variable factor of production.

Statement of Law of variable Proportions

Law of Variable Proportions states that as we increase quantity of only one input keeping other inputs fixed, total product (TP) initially increases at an increasing rate, then at a decreasing rate and finally at a negative rate.

According to the Law of Variable Proportions, the changes and behaviour of TP and MP can be classified into three phases. Let us understand each phase with the help of a diagram. 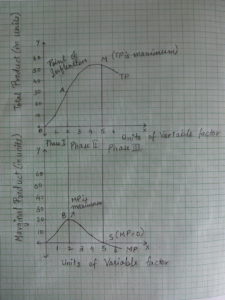 Phase I – Increasing Returns to Factor

Assumptions of Law of Variable Proportions

A rational producer will always prefer to operate in the second phase of the law of variable proportions. In Phase I every additional unit of variable factor gives increasing amount of output. This means that more profits can be made and the producer increases production with more units of variable factor.

In the third phase of the law of variable proportions, marginal product of additional units of variable factors is negative and the total product is declining. This means that the producer will lose profits. Therefore, no rational consumer will choose to operate in this phase. This concludes that a produce will aim to operate in the second phase as TP is maximum and MP is positive.