Description: This chapter discusses about the locational setting of our country- India as well as the physical and political aspects which makes the country unique.

The physical setting of India is extremely fascinating with the mighty Himalayas in the North as well as North East which extends for about 5 lakh km2 with nearly 30 peaks extending to heights of 7620 m. In the West, we have the great Thar desert which acts as a physical boundary between Pakistan and India. The Southern part of India is a peninsula which is surrounded by the Arabian Sea in the West, the Indian Ocean in the south and the Bay of Bengal in the East. The North Central part of India has a vast fertile plainland which supports the highest population. The peninsular India is mostly a Plateau region.

Locational setting: Our country-India is situated north of the equator between 8°04′ to 37°06′ north latitude and 68°07′ to 97°25′ east longitude. One of the most important lines of latitude- The Tropic of Cancer (23°30’N) passes almost through the middle of the subcontinent making the country a tropical region.

On the south, India projects into the Indian Ocean where it has its two important Union territories, the Lakshwadeep in the West (Arabian Sea) and the Andaman and Nicobar Islands in the East (Bay of Bengal). The Park Strait separates India from Sri Lanka.

India’s neighbours: India has the third largest international border in the world  after China and Russia. Seven different Countries share borders with India. The natural terrain or physiography of our country-India is such that, it has been protected from all its sides by some natural barrier.

The rugged terrain of the Himalayas with its snow-clad peaks separate India from China, Nepal, Bhutan and Myanmar. The Thar Desert in the west forms a barrier between Pakistan and Rajasthan of India. The Palk Strait in the South separates India from Sri Lanka. Bangladesh and India are separated by many rivers and tributaries of Ganga. 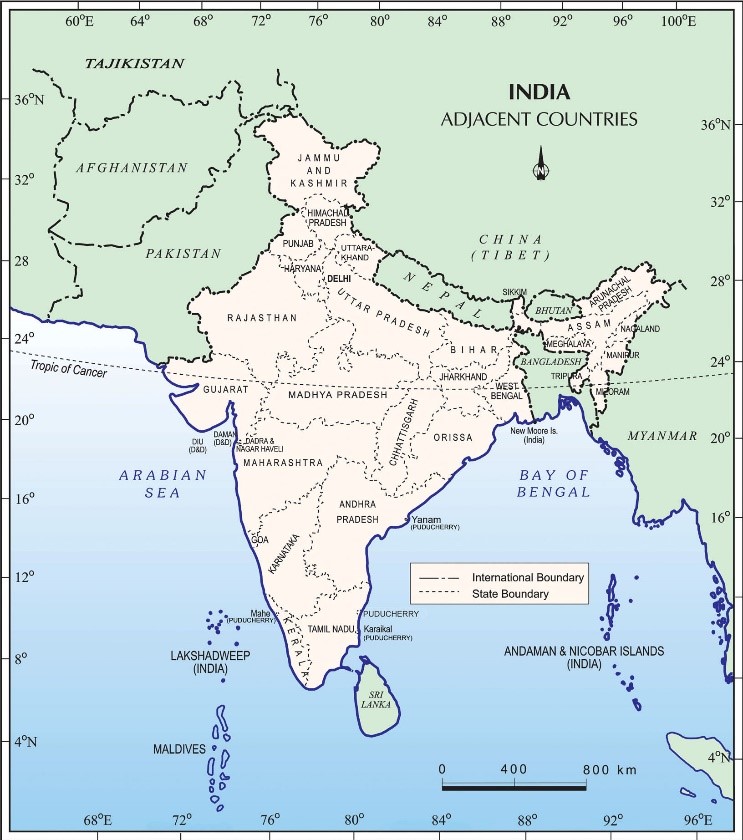 A comprehensive list of all the Neighbouring Countries of India along with its shared bordered states are given below:

Political and administrative divisions:  India is a democratic country with 29 states and seven union territories in India. Each state and union territory of India has an administrative, legislative and judicial capital. The States and their respective capitals are given below in the list: 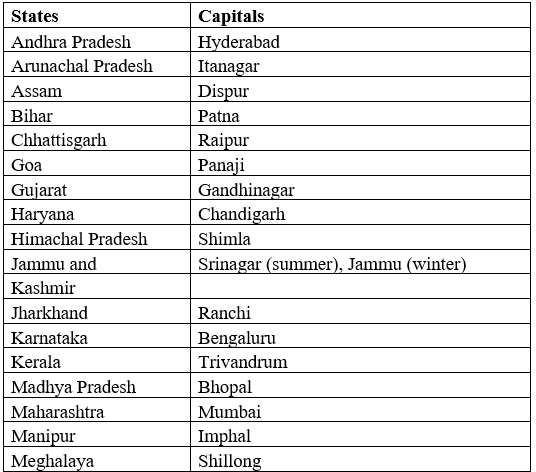 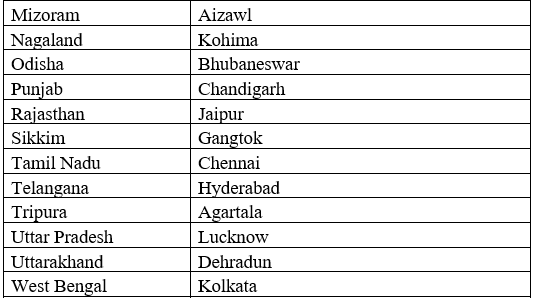 India is marked by a diversity of physical features such as mountains, plateaus, plains, coasts and islands. Let us discuss about the various physical divisions along with its importance:

Mountains:  In the North, we have the Himalayas which is further divided into three ranges:

Plains: Just below the Siwalik ranges, forms a green lush of fertile land formed by the mighty rivers of the Himalayas. This plain is also known as the Indo Gangetic Plain and encompass an area of 700,000 km2. This is the most fertile area of the entire country. Crops like rice, wheat, cotton, sugarcane, jowar, bajra, jute are grown. The plains form the most suitable habitat for most of the population in the country.

Plateau: The central region of India just below the Vindhyas and Satpura range is known as Deccan Trap. Rugged topography, dry climate and red soil are a characteristic feature of this area. Most of the rivers in the southern India begin their courses from the Deccan Plateau region. This region is rich in minerals and have black soil which is extremely fertile.

Coastal Plains: two narrow strips of plain land are present in the peninsular plateau arising right from the foothills of the Eastern and western ghat. This region is extremely fertile with alluvial soil and is another most populous area of the country. Due to its pleasant climate and fertile soil, the two coastal plains of India are a favourite tourist destination.
They are formed by the erosional and depositional & activities of the Sea waves and from the sediments brought by the peninsular rivers.
Thus we now understand the various physical divisions of our country which makes India unique, the various political administrative divisions as well as the neighbouring countries which share an international border.