All the elements and compounds are pure substances because they contain only one kind of particles. A pure substance is homogenous throughout its mass.

A compound is a homogenous substance. Properties of compounds are entirely different from their constituent elements. They cannot be separated into its components by physical methods. Energy in the form of heat, light etc. is usually either given out or absorbed during the preparation of a compound. The composition of a compound is fixed, the constituents are present in a fixed proportion by mass. It has fixed melting point, boiling point etc.

A mixture is a substance which consists of two or more elements or compounds not chemically combined together. For example – air is a mixture of gases like oxygen, nitrogen, argon, carbon dioxide, water vapour etc., all solutions are mixtures.

A solution of Sugar and water is a homogenous mixture because its components are indistinguishable from each other. There no visible boundary that separates sugar from water. The mixture has sugar distributed in it evenly. There is uniformity in its composition. Similarly, solution of salt and water, copper sulphate solution, lemonade, vinegar, alloys, air, kerosene etc. are all homogenous mixtures.

A mixture of oil and water is a heterogenous mixture because its components do not mix well with each other. We can easily distinguish oil layer in water as there is visible boundary between the two. Since oil does not mix with water therefore, its composition is not uniform in water. Similarly, sugar and sand mixture, polluted air, gunpowder, milk, ink, petroleum, paint, dyes, milk of magnesia etc. are all examples of heterogenous mixture.

Difference between element and compounds –

Difference between mixtures and compounds – 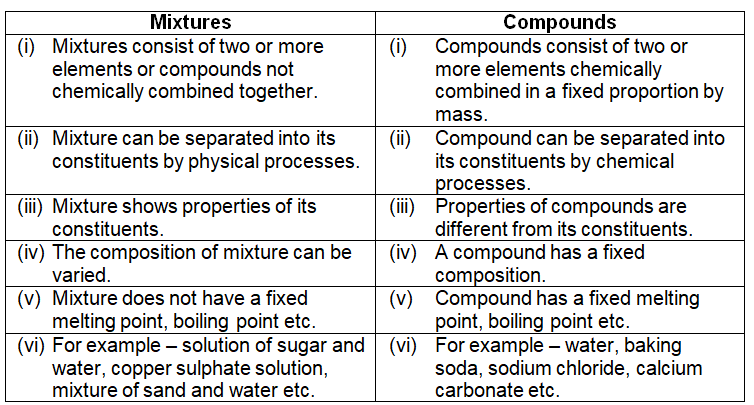 Questions related to the topic Elements, Compounds and Mixtures from NCERT textbook – Page 15

List the points of differences between homogenous and heterogenous mixtures.

Questions related to the topic Elements, Compounds and Mixtures from NCERT textbook – Page 18

Differentiate between homogenous and heterogenous mixtures with examples.

Try segregating the things around you as pure substances or mixtures.

Questions related to the topic Elements, Compounds and Mixtures from NCERT textbook – Page 28, 29 and 30

Classify each of the following as a homogenous or heterogenous mixture:

Classify the following into elements, compounds and mixtures: