The chapter ends with a discussion on the global influence of the Russian Revolution and the USSR.

Class 9 History Chapter 2 Extra Questions are Answered in detail by our team of experts which includes teachers and professionals. These solutions have been compiled in an easy to understand manner, keeping in mind, the perspective of strong, and weak students. We are providing NCERT Solutions for Class 9 all subjects which can be accessed by clicking here.

Ques.1: Who were the Liberals?

Ans.1: The Liberals were a group of people who aimed at changing society and were secular. They did not favour any specific religion and were particularly against the concept of monarchy. They believed in the concept of fundamental rights and were largely in favour of representative parliamentary form of government elected by the citizens themselves. They demanded the setting up of an independent judiciary to safeguard individual rights. However, they did not support the concept of universal adult franchise and were against granting the voting rights to women, and believed that only  men owning property should be allowed to vote.

Ques.2: Who were Radicals?

Ans.2: The radicals were a group of people who believed that the governments should be based on the vote of the majority of the population. As opposed to the liberals, they believed in the universal adult franchise and some even favoured granting voting rights to women.They were against the privileges of wealthy landowners, but they did not oppose private ownership. They were only against the accumulation of wealth with a small section of society.

Ans.3: This section of the society completely opposed any kind of change and was absolutely opposite to liberal and radical ideology. However, gradually they changed their ideology and favoured change through a slow process.

Ques.4: What was the Suffragette movement?

Ans.4: It was a movement demanding the right to vote for women.

Ques.5: Whose writings inspired people in Italy to fight for nations with equal rights?

Ans.5: Giuseppe Mazzini’s writings became an inspiration for not only  the people of Italy but also for the populations across various other countries.

Ques.6: Name some of the famous socialists.

Ans.6: Some of the popular socialists with different ideologies were:

Ans.7: New Harmony was a cooperative community, set up on the suggestion of Robert Owen.

Ques.8: Which socialist trade unions formed with the support of socialism?

Ans.8: Various socialists trade unions were formed across Europe with the support of socialism. These were:

Ques.9: Which international body was formed to coordinate the efforts of socialism across Europe?

Ques.11: What was the extent of the Russian empire?

Ques.12: What feature set apart the Russian peasants from other European peasants?

Ques.13: Which workers called themselves the ‘aristocrats of workers’ and why?

Ans.13: Metalworkers in the factories considered themselves as the ‘aristocrats of workers’ as theirs was among those works requiring special skills, expertise, and training.

Ans.14: The socialist parties formed in Russia were:

Ques.15: What were the internal factions of the Russian Social Democratic Workers’ Party?

Ques.17: How did February 23 come to be recognised as the International Women’s Day?

And.17: On 23 February, workers from 50 factories took to roads to strike and protest against the lockout in a factory. Many groups in these strikes were led by women. Hence, this day came to be recognised as International Women’s Day.

Ques.18: Who were the reds, greens, and the whites?

Ans.18: Reds were the Bolsheviks; greens were the Socialist Revolutionaries and whites were pro-Tsarists.

Ans.19: Jadidists was a section of people in Muslim society demanding modernised Islam.

Ques.20: Who headed the Bolshevik Party after Lenin’s death?

Ques.21: Which organisations came into existence as the result of the global influence of the USSR?

Ans.21: The impact of the Russian Revolution was visible across various nations. People from non-USSR nations actively participated in major organisations like:

Ques.1: Differentiate between Liberals and Radicals. 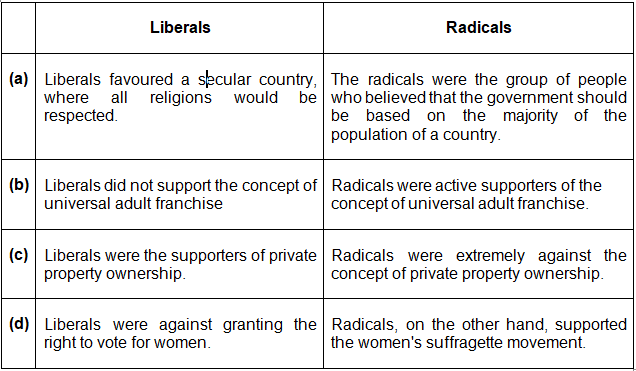 Ques.2: Who were the socialists?

Ans.2: Socialists was the name given to the followers of socialism.

Ans.3: The ideology of socialism around the world varied from one region to another. People had their own visions about how society should be structured as a socialist one.

Ans.4: The Marxist ideology was named after the ideologist who proposed the theory, i.e. Karl Marx.

Ques.5: When and how did socialism spread across Europe?

Ans.5: The ideology of socialism grew popular in the rest of Europe by the 1870s. The Second Internation was set up to coordinate the socialists across Europe. Eventually, workers in Germany and England began forming associations and unions and started demanding better wages and working conditions. Funds were maintained to help the members of associations in times of need. Associations like the Social Democratic Party in Germany, Labour Party in Britain, and the Socialist Party in France were set up. The idea of socialism grew stronger and gradually began influencing the governments.

Ques.6: Describe the Russian economy at the beginning of the twentieth century.

Ans.6: The Russian economy was largely dependent on agriculture, with 85% of its population engaged in agricultural practices.

Ques.7: How did the Social Democrats differ from the Social Revolutionaries?

Ans.7: The Russian Social Democratic Workers Party was found in 1898. The Socialist Revolutionary Party came into existence in 1900. They believed that the system of Russian peasants whereby they pooled and redistributed their land depending on individual family needs was socialist in nature, and hence the peasants should be the force of the revolution.

However, the Democrats disagreed on the ground that the peasants were a diverse community with some peasants being rich, owning the land,employing the poor peasants and others to work on their fields, were the less prosperous ones forced to work on the farms of capitalistic peasants. Hence the Democrats believed that not all peasants could be a part of the socialist movement.

Ques.8: What were the consequences of the 1905 Revolution?

Ans.8: The consequences of the 1905 Revolution were as follows:

Ques.9: What was the April Theses?

Ans.9: After the February Revolution, when Lenin returned from exile in April, he realised that now it was time for the Soviet socialists to control the power. Lenin put forth the following three demands:

These demands were together known as the April Theses.

Ques.10: What changes were brought by the Bolsheviks after the October Revolution?

Ans.10: The changes brought by the Bolsheviks after the October Revolution were:

Ques.11: How did the political conditions change after the October revolution?

Ans.11: After the October Revolution, a series of political changes took place in Russia.

Ques.12: What led to the Civil War in Russia?

Ans.12: As the land was now being redistributed, soldiers and peasants began moving to their homes to acquire the land.

Ans.13: By the year of 1950, socialists around the world began criticising the Russian Revolution as it no longer represented the ideals it began with. Though the country had witnessed modernisation of industry and development in agriculture, the essential rights were denied to its citizens and they were largely being repressed. Eventually, Russia lost the reputation that it held among other socialist nations. But the Russian Revolution continued to inspire socialists worldwide.

Ques.1: Which event is known as the Bloody Sunday in the history of the Russian Revolution? How did it lead to the 1905 Revolution?

Ans.1: The workers and peasants in Russia, along with the Social Democrats and Socialist Revolutionaries fought for their rights and better living conditions during the 1905 revolution. Multiple factors agitated these groups to fight the government.

This was the infamous incident of Bloody Sunday. The events following this incident were collectively called the 1905 Revolution. Widespread protests took place all over the country, and a lack of civil liberties was questioned. A number pf unions were established by doctors, engineers, lawyers, and middle-class workers.

Ques.2: How was the First World War different on the eastern side as compared to the western side? What were its impacts on the Russian empire?

The war had major implications for the Russian industry.

Ques.3: Discuss in detail the February Revolution of 1917. What were its effects?

Ans.3: The city was divided into two economically separate sections. The workers were on the right bank of River Neva, and the left side of the river had all important buildings like the Palace and official buildings.

Effects of the February Revolution were:

Ques.4: What was the Russian Revolution? Discuss the October revolution in detail. What were its social and political impacts?

The social impacts of the October Revolution were:

The political impacts of the Revolution were:

Ques.5: What steps were taken by the Bolsheviks to make the Russian society socialist?

Ans.5: The Bolsheviks were the supporters of socialism from the very beginning. Once they took over the government of the country, they brought about certain changes to make the Russian society more socialistic. These were:

However, there were certain negative implications of growth. The working conditions of the workers worsened owing to large scale industrial construction. The transition to and then following of socialism brought both positive and negative effects, owing to the limited resources that the government possessed.

Ques.6: What measures were adopted by Stalin to overcome the shortage of food grains?

Ans.6: During the first Five-Year Plan, people across Soviet Russia were facing the problems of a limited supply of food grains. As the government put a maximum price ceiling on the expenses at which the farm produce could be sold, peasants became reluctant to sell the grains at the existing prices. This led to severe food shortages.

When after the death of Lenin, Stalin took over the control of the Soviet government, he speculated that the rich traders and peasants were hoarding the produce, waiting for the prices to rise.

To overcome this situation, Stalin introduced the collectivisation programme in 1928. Initially, the grain-producing areas were toured and kulaks, the well-to-do peasants were raided. Even after the raids, the grain continued to fall short of the demands. The reason behind this was thought to be the relatively small size of landholdings, making them less productive. As the land was already distributed among the peasants, the size of the lands was small and hence difficult to modernise.

In order to modernise the farms, the land had to be taken back from peasants and converted into large farms that were under the government’s control. Hence, the small farms were now merged together and turned into large collective farms, known as kolkhoz. The peasants were now forced to work on these collective farms and shared the profit among themselves. However, the peasants did not like this and as a result, cattle were killed by them on a large scale, reducing their population by one-third until 1931. Such criticism was unwelcomed and these peasants were severely punished. Independent cultivation was not allowed, barring a few exceptions.

However, the collectivisation programme did not solve the problem of food grain shortage. Devastating famines took place due to the bad harvests of 1930-1933, where over 4 million people died.

If you have any feedbacks on Socialism in Europe and the Russian Revolution Class 9 History Chapter 2 Extra Questions and Answers please write us on comment box.