Money market does not necessarily have a physical platform to make the transaction thus they are mainly transacted over a call or on the internet. It is a temporary deployment of funds where the major participants include reserve bank of India (RBI), state government, commercial banks, mutual funds, non banking financial institutions, large corporate houses etc.

There are various instruments which are part of money market having a maturity period up to one year. They are: 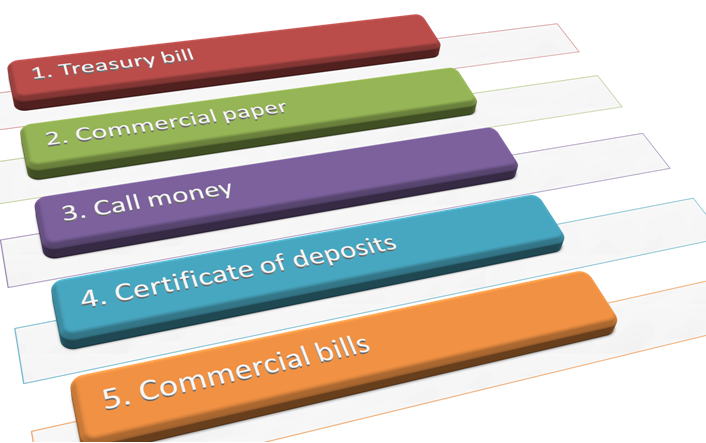 Treasury bill is an instrument of money market issued by the government of India (GOI) for a short period of time. These have a maturity period of less than one year. They are also issued by the reserve bank of India for a short period of time on behalf of government of India, also known as zero coupon bonds.
They are in the form of a promissory note which has negligible risk of default. They are issued at a discounted rate i.e. less than the face value. Then they are paid back at par. This difference in the price paid at the issue and the price earned at the redemption is the interest earned by the public. They are issued for minimum amount of Rs.25, 000 and then in multiples of Rs. 25, 000. People buy these treasury bills because of their assurance of return.
If a person is purchasing a treasury bill issued by the central government of face value Rs. 50, 000 at Rs. 45, 000. Then he would have paid Rs. 45, 000 at the time of issue and got Rs. 50, 000 at the time of redemption and this difference of Rs. 5,000 would e called the interest earned by him or her.

Commercial paper is a money market instrument which is issued for a period of 15 days to 1 year. It is an unsecured promissory note which is issued by the large corporate houses and is negotiable and transferable. Large corporate house and credit worthy companies raise funds through commercial paper to fund their short term needs through because it has lower rate of interest than the market rates or bank rates. This is similar in nature of issue with the Treasury bill as it is also issued at the discount and redeemed at par.
Main purpose of commercial paper is to serve the short term needs of the businesses such as day to day activities or working capital requirements. Although, when the firms are not able to pay back the amount taken through commercial papers then it can affect the goodwill of the firms severely.
Companies usually raise the funds through commercial paper for the bridge financing or for any short term project.

Call money is a short term instrument in the money market which has a maturity period of one day to fifteen days. It is used by banks for inter bank transactions. Call money is raised by one bank from another bank to comply with statutory cash reserve ratio and statutory liquidity ratio requirements.
The cash reserve ratio is altered by the reserve bank of India from time to time to control the circulation of money in an economy. Cash reserves are the amount of money that is to be kept aside by the bank which cannot be paid in the forms of loans to general public. When cash reserves to be maintained by the banks is higher, and then the amount of money which they can grant as loans is reduced.
Call money is the method through which banks take funds from each other to maintain the cash reserve ratio. The interest that is charged on the call money known as call rate is highly volatile as it changes frequently from day to day and even hour to hour. If the call rate increases then the other sources to raise funds become more attractive due to their less rate of interest.

Certificate of deposit is also a short term instrument of money market which is unsecured and is in the bearer form which is negotiable. It is issued by the commercial banks and developmental banks. It is issued by federal deposit insurance corporation and it is regulated by the central bank i.e. reserve bank of India. These are issued to the individuals or companies during the tight liquidity in an economy when the supply of funds is limited but the demand for credit is high.

Commercial paper is an instrument in the money market which is negotiable and self liquidating and is issued for the working capital requirements of the business. It is usually issued for the credit sales of the firm. Suppose there is a buyer of the goods (business firm) and a seller of goods (supplier). When the business firm purchases the goods from the supplier at credit i.e. without paying him in cash, then the supplier will issue a promissory note i.e. bills of exchange. When the bill of exchange is issued by the seller and the buyer of the goods accepts it, it becomes a trade bill and becomes a marketable instrument. If the seller is in urgent need for the money and cannot wait till the maturity date of that bill of exchange, then he/she can go to the commercial bank and can get that trade bill discounted and when the time comes to pay the amount, then the buyer will pay that amount to the bank directly. When the commercial bank becomes the mediator then the trade bill becomes a commercial bill.