Utility is the satisfying power of goods ad services. Utility, according to the cardinal utility approach, can be measured in absolute numerical values in terms of utils or they can also be measured in terms of the amount of money the consumer is willing to pay for those goods and services. Let us learn what is meant by Total Utility and Marginal Utility.

The total utility derived from the first unit of a commodity is known as initial utility. Total utility is zero at zero level of consumption. TU can be calculated as,

When the change in units of commodity consumed is more than one, MU can also be calculated as, 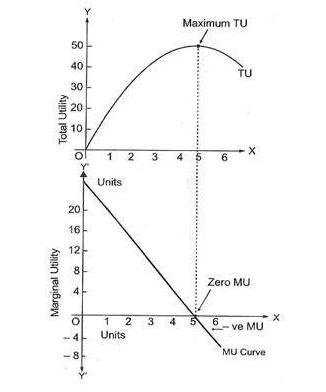 The total utility, TU increases with the increase in the consumption of a commodity as long as marginal utility MU is positive. In this phase, TU increases but at a diminishing rate because MU from each successive unit tends to diminish. When TU reaches its maximum, MU becomes zero. This is known as point of satiety. The TU curve stops rising at this stage. When the consumption is increased beyond this point, the point of satiety, TU start falling and MU becomes negative. This relationship between TU and MU is depicted by the diagram given above.