You are here: Home / Economics Class 12 / Government Budget and The Economy | Class 12 | Economics

A government budget is a statement showing item wise estimated receipts and estimated expenditures under various heads during a fiscal year which runs from April 1 to March 31.

(a)        Aggregate fiscal discipline level, i.e., an ideal balance between revenues and expenditures of the government.

(b)        Allocation of resources to social sectors to bring about equitable distribution of income and wealth.

COMPONENTS OF THE GOVERNMENT BUDGET 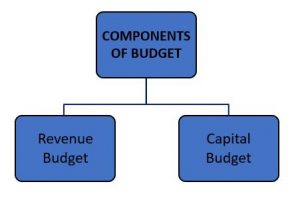 taxes, prices of goods and services supplied by public enterprises, fees, fines, gifts, grants, etc. budget receipts are estimated money receipts of the government from all sources during the fiscal year like.

The main components of government revenue are divided into Revenue receipts and Capital receipts.

This receipt does not either create a liability or lead to reduction in assets and can be divided into tax-revenue and non – tax revenue.

(a) Receipts from Tax Revenue

What is a Tax?

Types of Taxes: There are two types of taxes:

(b) Receipts from Non – Tax Revenue

What is Non – Tax Revenue? Non – tax revenue refers to the revenue receipts of the government from sources other than the tax.

(iv)       Escheat A claim of the government on the property of a person who dies without having any legal heirs or without leaving a will.

Capital receipts are receipts under capital account include market borrowings, external loans, recoveries of loans and advances the government and provident fund. For example, disinvestment of PSU the budget capital receipts are classified into three groups:

(i) Recoveries of Loans granted by the central government to state and union territory governments and parties.

(ii) Borrowings and other Liabilities. Government raises loans from the market, Reserve Bank of India foreign governments and other bodies.

(iii) Other Receipts. Include capital receipts other than recovery of loans and borrowing. Funds raised from ‘disinvestment’. Disinvestment means selling a part or whole of the public sector enterprises held by government. It is called capital receipt because it reduces the assets of the government.

Budget expenditure is the expense which the government incurs for its own maintenance as also for the society and the economy as a whole and includes expenditure of the central, state and local governments on various social, economic and political activities in the country to promote public welfare. 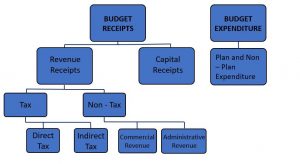 (i) Plan Expenditure. The expenditure to be incurred during the programmes under the current five year plan. On financing central plan relating to different sectors of an economy.

(i) Revenue Expenditure. Expenditure which does not result in creation of assets or reduction of liability is treated as revenue expenditure for the normal running of government departments and maintenance of services salaries, pensions, interest payments.

In this, receipts are not equal to expenditures of the government. It is of two kinds:

(a) Surplus Budget. It is one where estimated revenues are more than estimated expenditures. It lowers aggregate demand.

(b) Deficit Budget. One where estimated revenue is less than estimated expenditure. It is a good policy to control recession when an economy is in an underemployment equilibrium level.

It is one when estimated revenues are equal to estimated expenditures or the amount of tax is equal to the amount of expenditure. This kind of budget leads to slight increase in aggregate. It is not good for a less developed country like India. In such a country, the government should have more expenditures (than revenue) which will raise aggregate demand.

Balanced Budget multiplier defined as the ratio of increase in income to increase in government expenditure financed by taxes. Its value is always equal to unity.

Four types of deficits are as under

Revenue deficits are defined as the excess of revenue expenditure over revenue receipts.

Implication of revenue deficit is that the government is borrowing maintain even its consumption expenditure. It shows that the country’s financial system is getting destabilized.

Fiscal deficit is sum of borrowings and other liabilities of the government.

=    Borrowings and Other Liabilities

Fiscal deficit     =    Borrowing and other liabilities

The safe limit of fiscal deficit is considered to be 5% of GDP.

Fiscal deficit shows the extent of dependence of the government on borrowings to meet the budget expenditure. Implications of fiscal deficit are as follows:

(a)        Causes Inflation as raises the circulation of money.

(b)        Government borrows from rest of the world. There is economic and political interference by the lender countries.