Disequilibrium in Balance of Payment | Economics

It is a double entry system, which means it compromises of debit and credit.

In this we ‘Credit’ All Incomes and Gains.

‘Debit’ All Expenses and Loses.

In an ideal scenario, BoP should be zero. i.e

But it rarely happens especially in case of India

So whenever there is a surplus or deficient, BoP is said to be in disequilibrium.

For adjusting the gap in balance of payment let’s look at two terms we use in this context:

When international economic transactions are made for any other reason other than to bridge the gap between surplus or deficient in payment then they are  called autonomous transactions, that is, when they are independent of the state of BoP. One reason could be to earn profit. These items are called ‘above the line’ items in the BoP. The balance of payments is said to be in surplus (deficit) if autonomous receipts are greater (less) than autonomous payments.

Reasons for Disequilibrium in Balance of Payment (BoP): 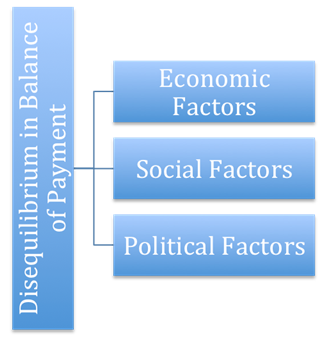 Economic Factors are those factors which are realted with an economy of a country. Imbalances in import and Export, Inflation, changes in supply and demand, business cycles(recession and boom),high domestic prices leading to imports  are the main factors behind disbalance in balance of payments.

Often coming of new fashion and changes in taste in terms of  clothing of a country causes demand of products from other countries as compared to domestic products.

Whenever there is political disturbance or the goverments are not stable, this often leads to more imports to fulfill the demands of the citizens of the country. During the time of war, change in reign like from monarchy to democracy this is common occurrence.

Methods for overcoming Disequilibrium in BoP (Balance of Payment):

Making a demand for homegrown products in other parts of world and imposing tarifs are one of the ways to curb the disequilibrium. At times, depriciating a country’s currency in regard to dollar or euro is also seen as method as by that you are making your own country products cheaper and also increasing its demand. Controlling the prices of commodity can also help with diequilibrium.