Goodwill Meaning – Goodwill Meaning, in general terms is the positive reputation of the firm, which enables it to achieve higher profitability, against its competitors, by helping it to attract a larger number of customers.

The definition of Goodwill given by various authorities are as under:

“The term goodwill is generally used to denote the benefit arising from connections and reputation.”

“Goodwill is nothing more than the probability that the old customers will resort to the old place”.

“Goodwill may be said to be that element arising from the reputation, connections or other advantages possessed by a business which enables it to earn greater profits than the return normally to be expected on the capital represented by the net tangible assets employed in the business.”

The need for Valuation of Goodwill may arise under the following cases : –

(i)         Change in profit sharing ratio amongst existing partners.

(iii)       Death or retirement of an existing partner in a partnership firm.

( v)      When the business of a firm is sold to outsiders, valuation of goodwill of business.

There are two types of goodwill, purchase goodwill and self generated goodwill. The definition of these two are discussed as under : –

Methods of Valuation of Goodwill

The following methods are most commonly used methods of Valuation of Goodwill:

(i)         Average profit method of valuation of goodwill

(a)       Capitalisation of Average Profit

(b)       Capitalisation of Super Profit

Generally, the goodwill represents the ability of a company to earn certain excess profits over the normal profits earned by competitors for certain number of years. Number of Year’s Purchase, implies that the firm is expected to earn the same amount of profits , as they are earning, after the admission (or retirement/death) of a new partner for the given number of years  .

Aaroh and Avroh were partners in a firm. They admit Anant for 3/4 the share in partnership, on 1st April 2016. Calculate the value of Goodwill on the basis of 4 year’s purchases of normal average profits of the last 5 years. The Profit and Loss Account showed the profit as follows: ”

A. Capitalisation of Average Profit Method

B. Capitalisation of Super Profit

The profits of a firm for the year ended 31st March for the last 1 year were as under :

The value of goodwill on the basis of  1 years purchase of the weighted average profit will be:

Some examples of methods of valuation of goodwill are as given below:

Average profit of the firm are Rs. 2,00,000 .Total tangible assets in the firm are Rs . 25,00,000 and Outside Liabilities are Rs. 10,00,000 .In the same type of business , the normal rate of return is 10 % of the capital employed.The value of goodwill by capitalisation of super profit method will be:

B , C and D are partners sharing profits and losses in the ratio of 2 : 1 : 3 . They admit E for 1/3 share. For the purpose of admission of E ,the goodwill of the firm is to be valued on the basis of 1 years purchase of last 3 or 4 years profits,whichever is higher. The profits were:

The value of goodwill will be:

Average net profit of A Ltd expected in the future is Rs . 100000 per year.The average capital employed in the business is Rs 500000 .Normal profit expected from capital invested in this class of business is 10 %.The Remuneration of the partners is estimated to be Rs 20000 per annum.The value of goodwill on the basis of 3 year’s purchase of super profit will be :

The profits of a firm for the year ended 31st March for the last 2 years were as under :

The value of goodwill on the basis of  1 years purchase of the weighted average profit will be: 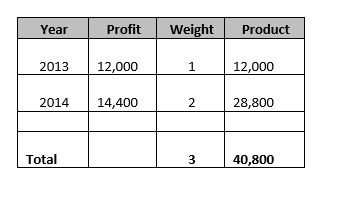 Chapter 3 – Reconstitution of a Partnership Firm

Chapter 4 – Reconstitution of a Partnership Firm