The “ business connection” shall include any business activity, carried out by the non-resident through a person who, acts on behalf of the non-resident, and in  performing such an act he : –

The above provision shall be applicable provided that the contracts are  –

When authority is not exercised

If the agent has an authority to conclude contracts but such authority is not exercised , in such a case the non-resident would not have a business connection in India.

Agent qualifies to be an independent agent

Further, if such an agent qualifies to be an independent agent, the non-resident would not have a business connection in India. An agent who is a broker, general commission agent or any other agent, who are acting in the ordinary course of their business, they shall be treated as agent of independent status.

Goods are exported to a third party

XY International (UK) is engaged in the business of selling ‘Product A’. It appoints Mr. R as agent in India for selling such product. Mr. R negotiates with the customers in India on pricing and other terms of the contract and concludes such contract on behalf of XY International. In this case, Mr. R would be deemed as dependent agent of XY International in India. Thus, any profit attributable to his operations in India would be taxable in India.

ABCD International (UK) is engaged in the business of selling ‘Product X’. It appoints Mr. B as agent in India for selling such product. Mr. B negotiates the contract with the customers in India and ABCD is bound by price/other conditions negotiated by Mr. B. However, after finalizing terms and conditions of contract with customers in India, Mr. B sends such contract for formal approval and signature by ABCD.

In this case, Mr. B negotiates with the customers in India but does not conclude contracts with them and this way ABCD circumvents the PE rule .

Beta Inc., USA manufactures and sells certain software worldwide. It appoints Rajesh as sales head who negotiates price and delivery terms with customers . Beta Inc. is bound by terms negotiated by Rajesh. Whether Beta Inc. has any business connection in India?

In order to establish business connection in India, the agent must have an authority, which is habitually exercised to conclude contracts on behalf of the non-resident. Rajesh is negotiating with customers on pricing and delivery terms and Beta Inc. does not have an authority to modify the pricing and delivery terms.  Beta Inc. has a Business connection in India as Mr. Rajesh is habitually exercising authority to conclude contract on behalf of Beta Inc.

EXAMPLE 2 : – AGENT  NOT EXERCISING AUTHORITY TO CONCLUDE CONTRACT ON BEHALF OF NON-RESIDENT

NY Inc. manufactures and sells certain software for distribution worldwide. It appoints TOM as sales head in India. TOM informs potential customers in India about Product features, price list but does not negotiate with customers on the pricing  and delivery terms. Only NY Inc. negotiates on pricing and delivery terms of contract, and the contracts are concluded outside India. Whether NY Inc. has any business connection exist in India?

SIGNIFICANCT ECONOMIC PRESENCE OF A NON-RESIDENT IN INDIA – [EXPLANATION 2A  TO SECTION 9(1)(I) INSERTED BY FINANCE ACT, 2018] –

a)    Any transaction carried out by a non-resident in India in respect of any goods, services or property including provision of download of data or software in India .

In order to constitute a significance economic presence  the aggregate of payments or revenue arising from physical goods or services and digital goods or services during the previous year should exceed the prescribed limit . However, no threshold limit of revenue has been prescribed by the CBDT till now for applicability of such provision .

b)    Systematic and continuous soliciting of its business activities in India or engaging in interaction with such number of users in India as may be prescribed, through digital means.

No threshold of number of users has been prescribed by the CBDT with whom a non-resident engages in interaction or carries out systematic and continuous soliciting of business activities in India for applicability of such provision .

The following income arising to foreign company or non-corporate non-resident shall be exempt from tax:-

a) Income by way of royalty from the National Technical Research Organisation (NTRO), or

b) Fees for technical services rendered in or outside India to, the NTRO.

Consequently, NTRO will not be required to deduct tax at source on such payments.

Any income accruing or arising to a foreign company from sale of leftover stock of crude oil,   from a facility in India shall be exempt in the following cases : –

Under the existing regime of the Income-Tax Act (the Act), there was an income-tax exemption u/s 10(38) of the IT Act on long term capital gains from transfer of equity shares of a company or an unit of equity oriented fund or an unit of business trusts, provided certain conditions like chargeability to securities transaction tax (STT) were satisfied. It was felt by the Government, that this regime was inherently biased against manufacturing, and has encouraged diversion of investment in financial assets. It has also led to significant erosion in the tax base resulting in revenue loss.

In order to minimize economic distortions and curb erosion of tax base, the Finance Act, 2018 has withdrawn exemption u/s 10(38) and introduced a new section 112A in the Act.

Section 112A , in the IT Act provides for a  concessional tax rate on long-term capital gains,  arising from transfer of equity share or a units of an equity-oriented fund / business trust.

The requirement of payment of STT at the time of transfer of long term capital asset,  shall not apply if –

ABC International (USA), earns long-term capital gains of Rs 90,000 on transfer of listed equity shares during the PY 2018-19. Such gains are not taxable u/s 112A as it does not exceed Rs 1 lakh.

A. Benefit of unutilized exemption limit

Note:- This benefit is available only for resident Individuals and HUF. Thus, such benefit is not available for non-residents.

Deductions under Chapter VIA cannot be availed in respect of the long-term       capital gains, for which benefit of concessional tax u/s 112A has been claimed by the assessee.

D. Rebate under Section 87A

Where the total income of an assessee includes any long-term capital gains as referred to in Section 112A, the rebate under section 87A shall not be available from the income-tax calculated on such capital gains.

Where equity share or unit, etc. is acquired before February 1, 2018, then its cost of acquisition shall be computed by the following method   :-

Determine the lower of –

Determine cost of acquisition of such capital asset

Determine higher of Step 1 or Step 2, which shall be the cost of acquisition for computing capital gains 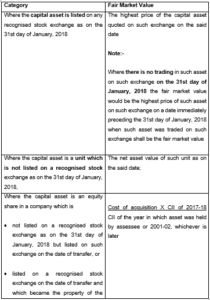 “Equity oriented fund” means a fund set up under a scheme of a mutual fund specified under clause (23D) of Section 10 and,

a. In a case where the fund invests in the units of another fund which is traded on a recognised stock exchange –

b. In any other case, a minimum of sixty-five per cent of the total proceeds of such fund is invested in the equity shares of domestic companies listed on a recognised stock exchange.

Provided that the percentage of equity shareholding or unit held in respect of the fund, as the case may be, shall be computed with reference to the annual average of the monthly averages of the opening and closing figures.

Consider the following data for computation of cost of acquisition of listed equity shares :- 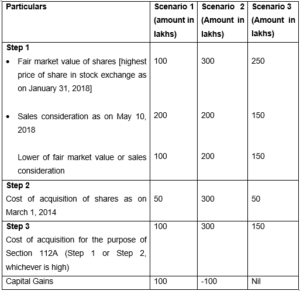 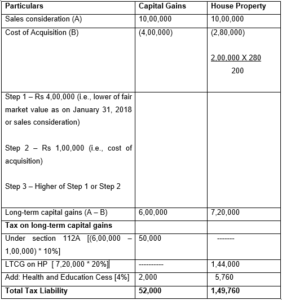 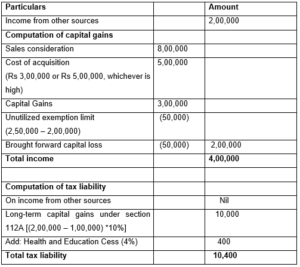 Computation of total income and tax liability of Mr. Anuj for the PY 2018-19 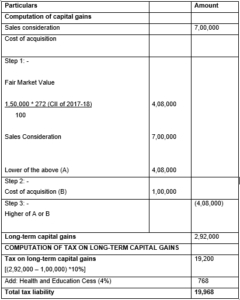 Income from certain units, or capital gains arising from transfer of such units,    by non-resident/foreign company from the following shall be chargeable to tax @ 10% : –

For the purpose of this Section, Overseas financial institution means

Any fund, institution, association or body, whether incorporated or not, established under the laws of a country outside India, which has entered into an arrangement (Such arrangement should be approved by the SEBI for investment in India ) with any public sector bank or public financial institution or a mutual fund specified under section 10(23D).

The following points should be noted in this regard :-

Explanation 4A to Section 115JB , has been inserted by Finance Act, 2018, and provides that the MAT provision shall not be applicable   to a foreign company (including for any of earlier previous years), if the total income of the foreign company, comprises solely of profits and gains from business referred to in following sections, and such income has been offered to tax at the rates specified in the said sections –

RELIEF FROM LIABILITY OF MINIMUM ALTERNATE TAX (MAT)  FOR COMPANY IN CORPORATE INSOLVENCY – INSERTED BY THE FINANCE ACT, 2018

For the purpose of computing book profit under Section 115JB, certain positive and negatives adjustments are required be made to the net profit as shown in profit and loss account . Section 115JB provides for a deduction from net profit in respect of the amount of loss brought forward or unabsorbed depreciation, whichever is less as per books of account. Consequently, where the loss brought forward or unabsorbed depreciation is Nil, no deduction is allowed. This non-deduction is a barrier to rehabilitating companies seeking insolvency resolution.

Finance Act, 2018 has amended the existing Section 115JB to provide that the aggregate amount of unabsorbed depreciation and loss brought forward shall be allowed to be reduced from the book profit, if a company’s application for corporate insolvency resolution process under the Insolvency and Bankruptcy Code, 2016 has been admitted by the Adjudicating Authority.

An equity oriented Mutual Fund , is liable to   pay additional income-tax at the rate of ten per cent on any  income distributed by it. Mutual fund is liable to charge dividend distribution tax , even when dividend is paid to a unit holder of equity-oriented fund who is non-resident Individual or foreign company.   For this purpose, equity-oriented fund will have the same meaning assigned to it in the new section 112A of the Act.The rate of dividend distribution tax is further increased by surcharge of 12% and health and education cess of 4%.