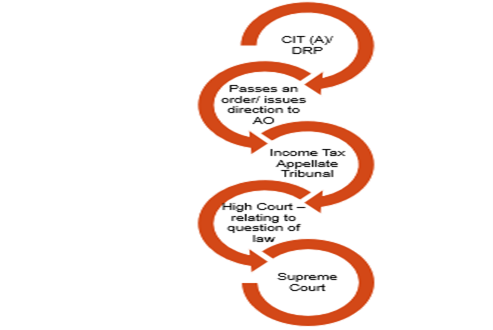 POWER OF ASSESSING OFFICER TO DETERMINE THE ARM’S LENGTH PRICE

Section 92C(3) gives power to AO to determine the arm’s length price in relation to international transaction and specified domestic transaction under the following circumstances : –

a. The price charged or paid in an international transaction has not been determined in accordance with section 92C(1) and 92C(2);

b. Any information and documents relating to an international transaction or specified domestic transaction has not been kept and maintained by the assessee in accordance with the provisions contained in section 92D(1) and the rules made in this behalf (Rule 10D); or

c. Use of unreliable or incorrect information or data in computation of the arm’s length price); or

d. Failure to furnish any information or documents required by a notice issued u/s 92D(3) within the specified time.

i. Section 92C(4) empowers the Assessing Officer to re-compute total income of assessee where Arm’s length price is determined by him in aforesaid situations.

ii. Proviso to section 92C(4) provides that deduction under section 10A or section 10AA or section 10B or Chapter VI-A shall not be allowed from the additional income computed by Assessing Officer on basis of Arm’s Length Price.

For example : – Total income declared by the assessee in his ITR = 10 lakhs; and

Difference = 3 lakhs, will not qualify for deduction under section 10AA or Chapter VI-A.

RECOMPUTATION OF INCOME OF COUNTERPARTY AE

iii. Section 92C further provides that where the total income of an AE is computed on the basis of arm’s length price paid to another Associated Enterprise, from which tax is deducted at source [or deductible at source], the income of the other AE shall not be recomputed on this count.

POWER OF ASSESSING OFFICER TO DETERMINE THE ARM’S LENGTH PRICE

As per Section 92C, where the total income of an AE is computed on the basis of ALP paid to another AE, from which tax is deducted at source, the income of the other AE shall not be recomputed on this count.

Therefore, income of foreign AE shall not be recomputed .

Option of making reference to TPO : – The Assessing Officer has the option to make reference to TPO for determining the Arm’s length price of international transaction or specified domestic transaction, if he considers it necessary to do so. Such option is not available to the assessee.

Authorisation: – CBDT can authorise any Joint/Deputy/Assistant Commissioner of Income Tax for  appointment as TPO.

TRANSACTION IDENTIFIED DURING THE COURSE OF PROCEEDINGS :-

TRANSACTION DEEMED TO BE REFERRED TO TPO  [SUB-SECTION (2B)] : –

Power given under Section 92CA(2B) to be exercised for pending cases: –

Nothing contained in sub-section (2B) of Section 92CA

shall empower the AO, either to assess or reassess u/s 147 or

pass an order enhancing the assessment or

reducing a refund or otherwise increasing the liability of the assessee u/s 154,

for any assessment year

the proceedings for which have been completed before 1st July, 2012. [Sub-section (2C)].

Order of TPO binding on AO : – The order of the Transfer Pricing Officer determining the arm’s length price of an international transaction or specified domestic transaction is binding on the Assessing Officer.

Computation of income on the basis of ALP : – On receipt of order of TPO, Assessing Officer shall proceed to compute the total income in conformity with the arm’s length price determined by the Transfer Pricing Officer [Sub-section (4)].

ALP shall be determined by TPO at least 60 days before the expiry of the time limit for completion of assessment by Assessing Officer u/s 153 or u/s 153B  (Section 92CA(3A)).

Arm’s length price shall be determined by TPO at least 60 days before the expiry of the time limit for completion of assessment by Assessing Officer.

As per Section 153, the Assessing Officer has to complete scrutiny assessment within 18 months from the end of AY in which income was first assessable. However, in case of reference to TPO such time limit would be extended by 12 months. Thus, normal time limit for completion of assessment is September 30, 2021 (i.e., 18 months + 12 months).

Accordingly, the TPO shall pass order till August 1, 2021 (i.e., 60 days earlier than the due date of completion of assessment).

EXCLUSIONS IN COMPUTING TIME LIMIT FOR PASSING THE ORDER BY TPO : –

for the purpose of determining the arm’s length price or

where proceedings before the TPO are stayed by a court order,

proviso to section 92(3A) provides that,

if the time available to the TPO for making an order [after excluding the time for which assessment proceedings were stayed or the time taken for receipt of information,

as the case may be,]

such remaining period shall be extended to 60 days.

Where any mistake apparent from the record is noticed by the TPO,  he has the power to rectify his order under section 154. If such rectification is made, the AO has to rectify the assessment order to bring it in conformity with the same.

On July 1, 2017, TPO passed the order, determining the arm’s length price of an international transaction for AY 2014-15.  Determine the time-limit for passing rectification order by TPO if there is an apparent mistake in such order ?

Where reference is made to TPO, he can exercise all or any of the powers specified in clause (a) to (d) of section 131(1) or section 133(6) or section 133A for determination of arm’s length price. 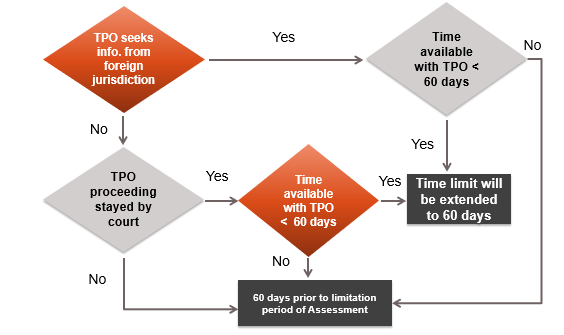