Thus, one can identify the following characteristics in case of a Tax avoidance: 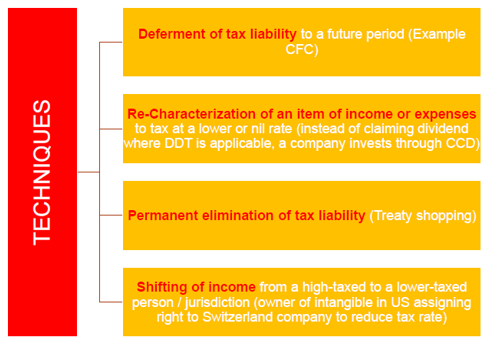 Anti-Avoidance measures are either a part of the tax statute by specific incorporation therein or developed by the judiciary over a period of time. 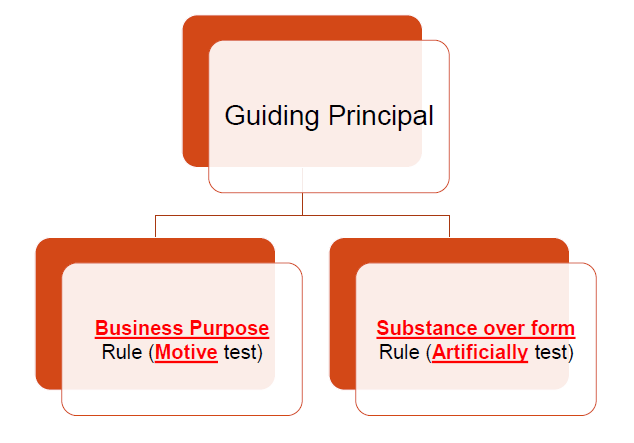 In the case of GREGORY V. HELVE RING , it was held that where the sole purposes of entering into a corporate organization , was to qualify for certain tax benefits, taxpayer was not entitled to such benefits, even when such reorganization was permitted under the law.

The principle of “substance over form”, requires that the economic, or social reality (that is substance), should prevail over the literal wording of legal provisions to determine the tax consequences of a transaction.  The   application of this doctrine   produces   tax result that are different  from the tax result that the  form of transaction would present.

Where a taxpayer has created certain documents , wherein a scheme of certain transactional relationships is made to obtain certain tax advantages, although in reality, there is no such economic linkage, as it appears from the documents, substance of the transaction, and not the form presented in documents should get precedence to decide the tax outcomes.

For example a non-resident seller of goods , has an Indian agent who sells goods on behalf of non resident and who may be an agency PE of the non-resident in India. To avoid PE exposure , the non resident shows the agency relationship as that of  Principal to Principal through an agreement, and shows sale of goods outside India. The agent’s commission is equivalent to the   margin left by the non-resident seller with the Indian party. In such a case, the substance of the transaction, and not the form presented in documents should get precedence to decide the tax outcomes

FACES OF SUBSTANCE OVER FORM RULE

Following are the faces of the substance over form rule : – 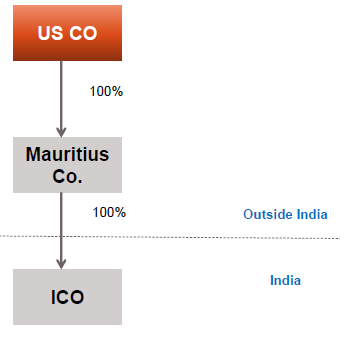 Under several provisions related to taxation of income, a non-resident is entitled to the benefits of the tax treaty, only when he is both the legal, as well as the beneficial owner of income. Where the recipient to receive anything on behalf of another person, who is not a resident of the state , the benefit under the Treaty are denied.

Sham transaction doctrine, seeks to deny tax benefit treatment to transactions which are entered into only for the sake of avoiding tax.

A sham transaction is the one where the ‘tax avoiders’, give effect to a transaction, which they : –

Parties use incorrect labels to classify or characterize a transaction or relationship for tax purposes.

While the transactions in such cases are real and not artificial or fraudulent, and   also create legal rights and liabilities, the true legal rights and obligations differ from the characterization by the taxpayer.

For example,  a transaction may be defined as a loan when it is actually an  equity, to enable parties to claim tax deductions or lower rate of taxation under Treaties.

In these cases, the taxpayers break a single transaction into distinct steps, which result in its acceptance for tax purpose and results in favorable taxation.

Certain countries (like USA, UK, Japan and Canada) regard a series of connected transactions as a single transaction under the “substance v. form” principle.

In India, with the introduction of GAAR regulations, such transactions can be clubbed to determine the tax consequences.

Under corporate laws, a company has a separate and distinct existence, vis a vis its shareholder.

Lifting of corporate veil refers to disregarding such separate and independence status of a company, and to directly tax the shareholders of such company

For example in case of a Mauritius company (owned by US shareholders), which has been used as an intermediary to invest in Indian company, and claim capital gains exemption under India-Mauritius Treaty, lifting of corporate veil refers to disregarding   status of Mauritius company, and to directly tax the US shareholders of such company on capital gains arising on sale of shares of Indian investee company.

Abuse of right, is the manipulation of the intention or spirit of the law. This doctrine strikes a balance between the interests of  the Government to increase tax collection and  right of the taxpayer to arrange  his affairs to inimize  taxes,  and choose the legal form of a transaction that suites this purpose.

However, if the result of such an arrangement is contrary to the purpose of the law, it is an abuse of rights by the taxpayer, as there is a conflict with the meaning, purpose or the scope of the tax rules. Under the abuse of rights principle, the Courts can disregard the legal form of a transaction, where transactions are solely undertaken to avoid tax

Many civil laws countries apply the Roman law doctrine of “Fraus legis” under which, any transaction, entered for tax avoidance purposes is disregarded by the Courts. The Courts then substitute such transaction with a “normal”transaction. The tax is levied assuming the taxpayer did not carry out the “disregarded” transaction, but a similar taxable transaction.

A simulated transaction is one where the parties agree on different terms, but subjectively intended to give effect to some other agreement. The apparent transaction is different from the real transaction, and has no basis in reality.

The courts in such cases, have considered actual rights and obligations created by the parties, and impose tax on their real transactions.

CIT VS. A. RAMAN AND CO., TAX AVOIDANCE   IS NOT PROHIBITED

The Hon’ble Supreme Court of India, in CIT vs. A. Raman and Co., followed Duke of Westminster’s case, and held,  that tax avoidance by arranging commercial affairs in a manner, such that charge of tax is distributed is not prohibited. The Supreme Court observed as under :

“………the law does not oblige a trader to make the maximum profit that he can get out of his trading transactions. Income which accrues to a trader is taxable in his hands. Income which he could have, but has not earned, is not made taxable as income accrued to him. Avoidance of tax liability by so arranging commercial affairs that charge of tax is distributed is not prohibited. A taxpayer may resort to a device to divert the income before it accrues or arises to him. Effectiveness of the device depends not upon consideration of morality, but on the operation of the IncomeTax Act. Legislative injunction in tax statues may not, except on peril of penalty, be violated, but may lawfully be circumvented….”

Subsequently, the Supreme Court in McDowell & Co. Ltd. vs. CTO, circumscribed the leeway allowed to taxpayers. The decision laid down the rule that tax planning may be legitimate provided it is within the framework of law.

“Tax planning may be legitimate provided it is within the framework of law. Colourable devices cannot be part of tax planning and it is wrong to encourage or entertain the belief that it is honourable to avoid the payment of tax by dubious methods. It is the obligation of every citizen to pay the taxes honestly without resorting to subterfuges.”

In Union of India vs. Azadi Bachao Andolan, dealing with eligibility of treaty benefits to foreign investors, who routed their investments to India through Mauritius, this test was further discussed by Supreme Court.

CBDT had issued Circular No.789 of April 13, 2000, which stated that the Mauritius Tax Residency Certificate issued by the Mauritius Tax Office, was sufficient evidence for accepting the status of residence and beneficial ownership of a Mauritius resident, for availing the benefits under Double Taxation between India and Mauritius executed on April 1, 1983. The Circular was challenged before the Delhi High Court and the Supreme Court. The Supreme Court reaffirmed that while examining a legally valid transaction, the Revenue should proceed objectively , and not hypothetically attribute “motives” behind the taxpayer’s action. However, the Court has upheld that the use of colorable devices or dubious method to avoid tax was not permitted.

In the case of Vodafone International Holdings BV vs Union of India, the issue waswhether indirect transfer of a capital asset outside India,  by a non-resident to another non-resident, shall be taxable in India by disregarding legal ownership of such shares held by such non-resident ?

The principles laid down by the Supreme Court were as under : –

Applying the Westminster principle, the Supreme Court held, that the Tax Authority cannot tax a subject without a specific provision in the legislature, and every taxpayer is entitled to arrange his affairs to reduce taxes. The Supreme Court of India ruled in the favor of Vodafone and held, that there are no conflicts between McDowell ruling and Azadi ruling, and therefore, no reconsideration of larger bench is required on this matter.