Planning means to think in advance about the major decisions such as what to do, how to do, who will do it and how it will be done. Planning involves major brain storming and thus helps in bridging the gap between the present position and the target position. Plans should be made very carefully because without proper plan, decisions cannot be made and it becomes difficult to take any further step. Organizing, staffing, directing and controlling also depend on planning.

Plans should be properly made by properly analysing everything. it has logical steps which should be followed for making an simple, achievable, logical, measureable and rational plan. These steps are as under: 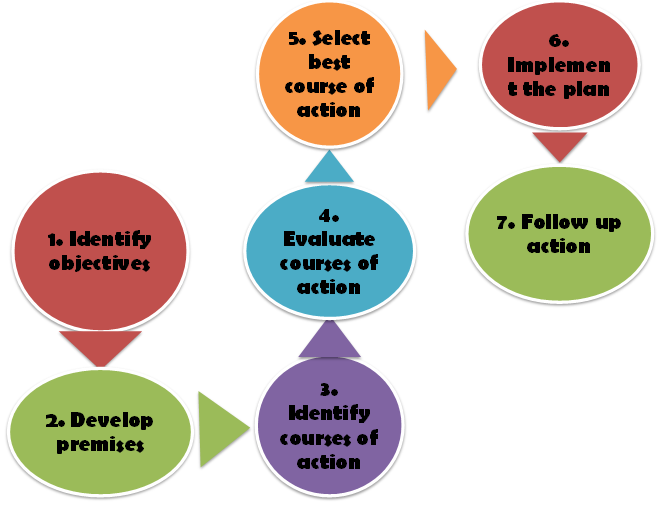 Objectives are set up for giving a direction to the organization. When objectives are stated properly it becomes easy for the employees to unite their actions at a focal point. Objectives should be specific, measureable, actionable, achievable, reasonable, rational, and time bound.

For example: A bicycle manufacturing company want to increase its sales by 10% this year. This is a primary objective set up by the company. Further, the departments can have different objectives such as getting a new technology for faster production or better production to increase demand of the bicycle etc.

Plans are always made for the future. We do not have accurate information about future. We are not sure about the happening which may happen in future. That is why; plans are made based on certain assumptions. These assumptions are called the premises for the plan. These premises are set based on the facts, forecasts, past plans, basic policies etc.

Every person or manager who is involved in planning should follow the same assumption to avoid chaos and bringing orderliness. Everyone should be in agreement with the premises set up by the organization.

For example: the bicycle manufacturing company has the objective of increase its sales by 10 % this year then it must take into consideration the following assumptions:

An organization should come up with these alternatives through brain storming, research, experiences, ideas from various people or stakeholders, and experimentation.

For example: the bicycle manufacturing company which wants to increase its sale by 10%, can reduce the prices, provide better services, increase the promotion of the bicycles etc.

After identifying various alternative courses of action, it is now the time to evaluate these various courses of action. This evaluation is done on the basis of positive and negative aspects of these actions. The pros of the proposal taken should be higher than its cons and should be in alignment with the objectives of the organization.

There are many different ways to evaluate these alternatives to find out their viability and feasibility. These methods include:

Reducing the prices:  Reduction in the prices of the product will attract various customers but it will become difficult for the company to cover the costs.

Not always the single plan will work, sometimes a combination of various alternatives have to be selected for better results.

Now the plan is ready to be implemented. The plan now needs the action. The next steps need to be taken such as organizing, staffing, directing and controlling. For proper implementation and to get the best results, it is important to align the objectives of various departments and divisions with the main objective of the firm. Effective implementation is only possible with proper coordination.

For example: if the company wants to increase the manufacturing of the product then the next step will be to appoint the staff and the workers required for production and purchase the machinery for the same.

Just implementation is not enough checking up whether it is properly implemented or not is also very important. This is sometimes also called controlling because it involves looking back and comparing the results with the standard results and then taking the corrective actions. Feedback is the essence of planning as it helps in making changes to the plans and making the future plans.

Planning is the intellectual process which involves the mental exercise and various logical steps are to be taken for proper implementation and achieving the objectives. It is the first function of management and should be performed very carefully because making a mistake while planning which lead to chaos in the organization and other steps will suffer.