Business transaction, by a company, can spread over more than one country. For example, if a US company , which has a factory in New York, sells shoes to an Indian customer, it may earn income which is a result of manufacturing activity in USA, and customer located in India. If both India and US want to tax some portion of income earned by the US company, the issue of double taxation would arise. Such transaction can be : –

Lets understand this aspect with the following Diagram 1.1, where Alpha Inc. a US Co, has following transaction with its wholly owned subsidiary Saarthak India Private Limited (SIPL) : – 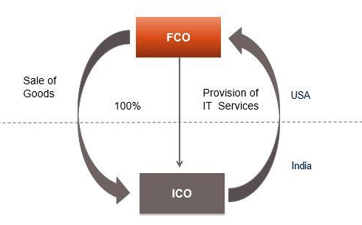 1. Determine the country which has the right to tax a particular income

The right to tax is generally, governed by the respective domestic laws of India and US, and the Tax Treaty ( Double Taxation Avoidance Agreement “DTAA”) between these two countries.

2. Determine the price of a transaction to arrive the profits earned by an Enterprise (particularly for related party transaction)