Management as a Science

Over a long period of time, management as evolved and grown with its own set of characteristics but it is also asked whether management is an art or it is a science or can it be classified as both art and science. The word ‘management’ has several connotations and it is a multi-verse subject, thus we would need to look for characteristics of science to judge whether it satisfies them or not.

Science is the systematized body of knowledge which is organized and based on certain facts, findings and laws to reach a general conclusion. It is a practical activity which is based on systematic structure and behaviour through observation and experimental verification to explain a phenomenon.

Science is a systematized body of knowledge which is based on observations and experiments and can be verified at any point of time. It follows the facts, the findings and the existing laws to prove other things. It is based solely on the cause and effect relationship. Whenever something happens the result is always going to be there.

For example: when the metal is heated and then it expands, this is also based on the cause and effect relationship and it follows a systematic theory of heat. Heating a metal is cause and its expansion is the effect.

Principles based on experiments

For example: whenever a vaccine is made, it is first tested on animals and some humans to find out its effect. Many experiments are done before launching it into market.

Scientific principles are well experimented, researched and observed. They are based on basic truth. They can be applied in any situation and then the result will be same as before. They are based on facts and thus are universally accepted and validated. Still, exceptions are always there.

For example: sun rises from east and this is universally accepted and cannot be refused by anyone on this planet.

Based on logic and observation

As we know that scientific theories are developed based on logic, facts and findings and thus they cannot be created simply by saying, proof is always required. Everything is first observed and experimented and then recorded and thus they are based on same effect.

For example: apple when falls from the tree, it only comes on the ground and never goes upwards because it is based on fact and observation that gravity pulls things downwards.

Two different people working on same kind of experiment may get the same result and thus the result is replicable. When two same things are done the result may be the same. 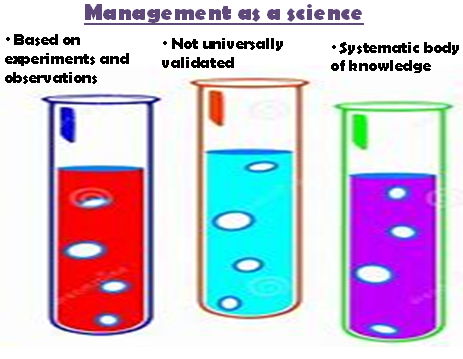 Management as a science

Management means managing or dealing with things or people. Management can be called inexact science because it follows some of the characteristics of science. These are as under:

Characteristics of Management as a Science

Management is also systematic body of knowledge. It is based on a particular theoretical knowledge and has various concepts and theories and is also linked to economics, psychology, mathematics etc. management also has its own jargons and own vocabulary which managers use to communicate.

For example: there are various principles of Henri Fayol such as division of work, unity of command etc

Principles based on experiments

For example: there are various principles of Henri Fayol and F.W. Taylor and they are based on experiment. Such as when an employee is given a bonus he or she tends to perform in an effective manner.

Principles of managers are not as exact as principles of science and that is why it cannot be universally accepted. These need to be modified according to the situation we are in. The result of a situation cannot be applied to another situation as we are dealing with human beings and behaviours are dynamic.

Based on logic and observation

Subjectivity is present in management as human beings are subjective in nature. Based on observation, managers can learn about situations but applying the exact same result is not possible in every case.

Replication is not possible

Replication is not possible at all. Every situation is slightly different from the other one and thus applying same result is not possible. Management is not based on cause and effect relationship and thus we need to find unique solution to every problem.

Management can be considered inexact science because it is based on a systematised body of knowledge but when it comes to universal validity or replication then it becomes difficult because of the human element present in it.