Functions, Assets and Risk (‘FAR’) analysis,  is the method of finding and organizing facts about the business of a MNE in terms of the following, which may be assumed by different entities in the International Transaction –

FAR ANALYSIS HELPS IN CHARACTERIZATION OF THE ENTITY (BASED ON WHICH THE TESTED PARTY IS DECIDED), AND UNDERSTANDING ENTIRE VALUE CHAIN OF BUSINESS.

In any transaction, various entities may perform different functions. For example, in case of an Indian company providing IT services to its US parent, the Indian company  is the service provider while the US parent is the service recipient . Similarly, if an Indian company providing IT services , use the Brand or IP of the US parent to provide services to third party customers, for any brand payment and use of technology, different role are played by the Indian company and the US parent. While performing FAR analysis, the functions performed by different parties to the transaction are analysed to ascertain, which Enterprise performs, the more important and significant activities, and which Enterprise carries out normal routine activities.

As a general rule, functions which add more value to the transactions, are expected to fetch higher returns, and accordingly, the enterprise performing important function, should receive a higher return out of the total Returns.

The importance of a particular function  in a given transaction  would depend on the nature of business of an entity . For example, in case of a company engaged in providing business process outsourcing (BPO) services, telecalling on behalf of clients to provide customer support, would be the most important function, as the  entire revenue depends on this function. However, in case of a manufacturer of goods, customer support would be an important but not the most important function.

Some of the important functions , generally observed, and examined in a transaction are as under : –

Once such principle functions are identified, we compare such functions performed in an uncontrolled transaction to determine the extent of comparability.

In order to carry on the business operations, each Enterprise, uses some assets. In the above example, to provide IT services, a company may use computers, technological IP etc.  Whether the company is engaged in the manufacturing of commodities or provision of services, they would use some assets to perform business activities. A comparison of such an asset base, used by the different companies in performing the international transaction, needs to be carried out for the purpose of FAR analysis.

Comparability of both, the assets used by the Assessee and comparable entity, as well as the classification of such assets, into  tangible as well as intangible asset,  is an important criterion to determine mark up which should be applied in a given transaction. Where one Enterprise, uses tangible assets, and another Enterprise uses intangible assets, the two may either be not comparable, or may require suitable adjustment to the prices, to ascertain the markup to be applied to a given transaction.

This step involves identification of degree of risk taken by each  party, in a given transaction.

In any transaction, between two multinational Enterprises, the extent of risk Borne by one of the parties to a transaction may be higher than the risk Borne by the other party. For example, in case of a foreign company which outsourcers some of its customer support services to an Indian subsidiary, and remunerate Indian subsidiary on a cost plus basis, the entire risk of business operation may be borne by the foreign parent. Therefore, a larger profit would need to be attributed to the parent company, as it assumes the entire business risk. Extent of profit , which would be earned by one party, would be the rewards for risk assumed by such party. Risk and rewards are directly proportional. i.e. more the risk, higher the return, and lower the risk assumed, lower the return expected.

COMMON RISK INVOLVED IN THE BUSINESS

Generally, every company grants some credit period to its customer. If the customer fails to pay the amount due to the Seller/Service provider , such loss may be borne by one, or more than one parties to a transaction depending on the terms of the contract between the parties. Thus there is always a risk relating to non-payment of dues by the customers. The party which bears such risk, should be attributed some part of the profit for bearing such risk.

Market risk arise due to increase in competition, relative pricing pressures due to business environment/competition, change in customer’s needs and demand patterns resulting in a product being no longer required, inability to grow and develop in a market etc. The party which bears such market risk, should be attributed some part of the profit for bearing such risk.

Financial risks,  relates to money management, which involves decisions on : –

In case, the country where an enterprise produces products/ from where it provides services has a different currency,  as compared with the country of the customer, there may be certain losses/gains which an Enterprise may incur/earn,  due to foreign exchange fluctuation between the time when the expenses incurred or billings  are done, and the time when the payments are made for expenses/ funds are actually realised from the customer. For example, suppose A Ltd. an Indian company sells goods worth USD 500 to Beta Inc., a US company on 1.4.2020 when the exchange rate is USD 1 = INR 75,  it is expecting receipt of Rs. 37,500 if the money is received on the same date. However, if it actually receives USD 500  on 30.4.2020 when the exchange rate is USD 1 = INR 80, it would receive Rs. 40,000  and gain Rs. 2,500. As against this, if the exchange rate  on 30.4.2020   is USD 1 = INR 70, it would receive Rs. 35,000  and loose Rs. 2,500. Risk relating to impact on profits, arising due to fluctuation in foreign exchange rates may only be borne by one of the parties to the transaction. In such a case, some profits should be attributed to the company bearing such   risk.

Capacity utilization risk refers to risk , relating to loss of profits due to unutilized capacity. Many a times due to lack of demand in the market, or an availability of qualified manpower, a company may not be able to produce  at  full capacity. For example due to lockdown in various countries due to COVID 19, the companies are unable to produce or produce at full capacity. In such a case, a reduced production results in  losses to the company. The party who bears such loss should be attributed some part of the profit for bearing such risk.

The party which bears the risk associated with losing key Managerial Personnel and Key employees, which contribute to the enterprise’s success, should be attributed some part of the profits for bearing such risk.

In case of a business enterprise, there is normally a time lag between production and sale of goods. However, since the demand maybe uncertain, normally every company produces and maintains certain minimum level of inventory. One or more parties in a  transaction may bear the risk associated with management of inventory, like overstocking or slow/non-moving inventory. In certain cases, where inventory is not sold, the enterprise may be forced to bear a loss of margin on the inventory, or incur additional costs to dispose-of the same. Again, due to Coronavirus situation and restriction on movement of cargo amongst countries/states, various inventories, particularly the one which is perishable has been destroyed/lost value. Some profits should be attributed  to the entity for bearing such risk.

In FAR analysis , “economically significant” functions performed, risks assumed, and assets employed should be considered (i.e. such functions, assets and risks that are likely to have an impact on cost/expenses, prices, profits arising in a transaction) for comparison.

ILLUSTRATIVE LIST OF FUNCTIONS, ASSETS AND RISKS FOR DIFFERENT ENTITIES 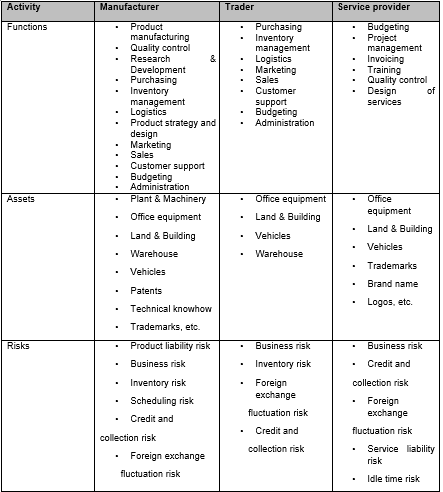