FOR EVERY INTERNATIONAL TRANSACTION, THE COMPANY NEEDS TO UNDERTAKE A FUNCTIONAL ANALYSIS AS UNDER 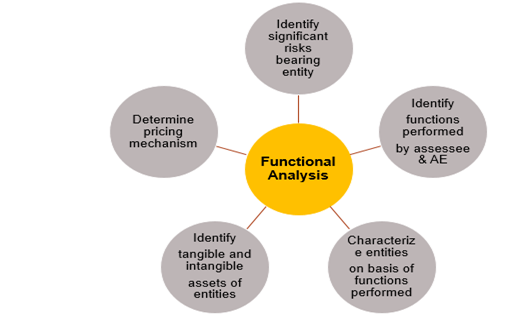 For every international transaction, Functional, Asset and Risk (FAR) analysis needs to be undertaken to identify the tested party – For Tested Party concept Refer Page <> .

Suppose, Samridhi Limited, an Indian company has entered into a contract to provide services for implementation of certain software to an Indian customer. In order to provide such services, it outsources a small part of the design work to its foreign Associated Enterprise Wealth Pte Singapore, for a fixed sum. In such case, Samridhi Limited would bear significant risk in comparison to Wealth Pte Singapore   and would, accordingly be the tested party.

The last step would be to identify the tangible and intangible assets used by each entity in performing their part of the operation. 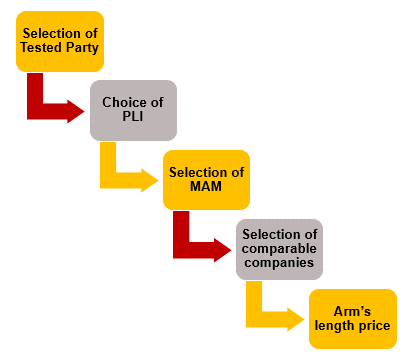 This is discussed in detail as under : –

a) Selection of Tested party :-

Based on the FAR analysis of the parties involved in an international transaction,  we need to select the tested party, since  the price/margin of tested party would be compared with that of an independent comparable entity.

The next step under the economic analysis is to select the PLI (i.e., Profit Level Indicator) of the Tested party , which would be compared with that of comparable entity. Whether the PLI would be Operating profit / Total Cost or Operating Profit / Operating Cost, etc. would depend on the facts of a given case and transaction .

c) Selection of Most Appropriate Method : –

Once the tested party and PLI has been ascertained, we need to evaluate various Transfer Pricing method, and ascertain which method is the best under given circumstances. Whether we should use CUP method or TNMM or Resale Price Method or Cost Plus Method, etc, needs to be ascertained . Some of the criterions could be as under : –

The next step is to select comparable independent companies, whose price/margin   would be compared with that of tested party.  When selecting the comparable independent companies,  care should be taken that they are not undertaking transactions with their respective Associated Enterprise. There are certain software available in the market which contains database of various companies for analysis of comparability. The factors which need to be considered to select the comparable company includes nature of business, availability of data, location of an entity, etc.

After identification of tested party, Profit Level Indicator, Transfer Pricing methods,  and comparables , we need to determine the Arm’s Length Price, based on methodology applicable for each such transaction considering the most appropriate method. If such Arms length price meet the criteria specified under the Transfer Pricing guidelines,  no further adjustment needs to be made. However, if the price is such that it results in higher taxation , compared to the tax offered by taxpayer, then appropriate transfer pricing adjustment needs to be made.

Every person, who enters into an international transaction during a previous year , is required to obtain a report from a Chartered Accountant in Form No.3CEB, and furnish such report to the tax authorities, on or before 30th November of the relevant assessment year – Please Refer this link for the Draft of the latest Form 3CEB .

The report in Form No.3CEB has two parts :

In the first part of the report, the auditor has to state that he has examined the accounts and records of the assessee, relating to the international transactions entered into by the assessee during the relevant year.

Further, auditor has to state whether the assessee has maintained the prescribed Transfer Pricing documents have been kept by the assessee.

In the second part of the report, the auditor has to state the particulars of  international transactions like :