WHAT IS AN E-COMMERCE TRANSACTION ?

E-commerce transactions are transactions of buying or selling online, which are made through the use of computers / mobiles/ other telecommunications devices and equipments.It also involves conducting any transaction , which involves transfer of ownership or rights to use goods or services through a computer-mediated network

Various authorities have given definition of E-commerce ..Read More

Click here for detailed explanation of Issues in E-commerce Transactions

HOW BUSINESS IS TRANSACTED THROUGH ECOMMERCE TRANSACTIONS?

Electronic sales is done certain resource which enables the customer to place an order online. In electronic sales, order may be placed online but the rest of the  transactions may  be completed through traditional means like, making payment via ‘cash on delivery’ (COD) or cheque, delivery of goods through courier, etc.

EXAMPLE :- Sales made by third party vendors through the use of platforms like Amazon, Flipkart, Paytm, etc. would be termed as electronic sales.

ELECTRONIC DELIVERY OF GOODS AND SERVICES 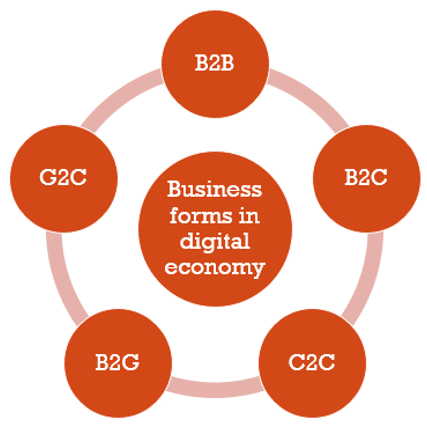 There are various forms of business which are prevalent in The E-Commerce segment. Depending on who the buyer is, and who the seller is, sUch forms can be broadly divided into the following categories : –

B2B E-commerce transactions consists of sale of products or services by one business to another business.In such transactions,    both     the       buyer   and      sellers  are       business entities.

In B2C business model, one business sells goods or services,  to individuals who are not in their profession.

B2C models can be of various types, some of which may include the following : –

Consumer to consumer, or C2C, is a business model , which facilitates commerce or business transactions between private individuals. C2C models are increasing rapidly. The businesses involved in C2C e-commerce play the role of intermediaries, helping individual consumers to sell or rent their assets (such as residential property, cars, motorcycles, etc.) by publishing their information on the website and facilitating transactions.

Quickr.com  and Olx.com  – Allows consumers to sell there used products to other customers who may be interested in purchasing them

Business-to-government models (B2G) refers to business conducted between private firms and Government.It may covers contracts for goods, services and information , between private players and government at all levels (state, local andfederal).

FOR EXAMPLE : – Contractors providing services to the Government relating to the construction of road, building dams etc.

Under the existing principles of international taxation, business income of non-resident , is liable to tax in Source State (India) , only when such a non-resident  has PE in the Source State.

There are various criterion to constitute a PE in Source State under the Source State. However, in order to constitute a PE, there should be some fixed place of business/dependent agent, in the Source Country through which business of the non-resident enterprise is carried on in Source State. Additionally, such a place should be at the disposal of the non-resident, i.e the non resident should have a right to use such place at will and should be able to exercise control on when and how to use such place.

However, it is difficult to apply the conventional PE test in case of E-Commerce Transactions , where the business is carried out through the use of a website. There may not be any physical presence of the non-resident in the Source State and  such transactions take place through website of non-resident. In such a case, the issue that arises is whether the existence of the website can result into a PE of the non-resident in the Source State. A website, is generally a set of documents which are located (hosted) on a Server, and are made available to the user. Sometimes , the server of a website may be located outside the Source Country.

When an enterprise does business in host Country through its website, then following three situations are required to be evaluated, to decide the existence of Permanent Establishment : –

In the context of a website, a website is a set of documents, data and programme in digitized form, owned by one organization, and stored on server which may be owned by the company or Internet Service Provider.

Under the existing rules and judicial precedence, mere existence of website in host country, where the server is also located outside the Source country, would not constitute a Permanent Establishment of the non-resident owner of website in that country.

Following scenarios may arise in such a case : –

Case 1 : – When server is operated by another independent enterprise
Case 2 : – When enterprise itself owns or leases and operates the server.

CASE 1 : – WHEN SERVER IS OPERATED BY ANOTHER ENTERPRISE

CASE 2 : – WHEN THE ENTERPRISE OWNS OR LEASES AND OPERATES SERVER

When an enterprise carries on business through website, whose server is at its disposal, then such server could be construed as PE of the enterprise.

Smart servers are servers that provide information to the company and also take and process orders from persons who hit on the website.Such smart server , which are located in the Source country, may be considered as dependent agent. However, a contrary view that is taken by many taxpayers is that such a  server , that hosts website is only a medium through which orders are placed. Therefore, website and server may not constitute a PE.

DETERMINATION OF NATURE OF INCOME IN E-COMMERCE TRANSACTIONS

The characterization of income is relevant because different type of income  are taxed differently. For example, Business  profits of non-resident are taxable only when    such a non resident has PE in  source  Country. Further, such income would be liable to tax @ 40%.

The general rules of taxation in case of E-Commerce transactions, are as under : –

a) When limited rights in property are transferred digitally, it would amounts to royalty. In this case, existence of PE is not required in host Country to tax royalty.
b) When all rights in property are transferred digitally, it would be considered as outright sale. Accordingly, it would be characterised as business profits which are not taxable in another Country in absence of PE in that Country. However, it may be noted that under certain circumstances, transfer of all rights in a property may be taxable as royalty under the provision of the Income Tax Act, and if such a property is a Capital Asset, professor rising on its transfer may be liable to Capital gains tax.

The supply and procurement of digital goods and services are rising at a rapid pace globally as well as in India, with expansions of ‘information and communication technology’ (hereinafter referred as ICT).  Such new technology has  given rise to new business models that do not require physical presence and rely more on digital and telecommunication networks.

Entrepreneurs across the world have been quick to evolve their businesses to take advantage of these changes. The digital economy has not only forced radical departures in ways of doing business it has also created entirely new businesses and opened up new markets job opportunities.

These new business models have also created new tax challenges in terms of nexus, characterization and valuation of data, and user contribution. These challenges have been recognized by the international community, leading to their inclusion in the Base Erosion and Profit Shifting (BEPS) Project endorsed by G-20 and OECD.

The typical taxation issues relating to E-Commerce are as under : –

a) Difficulty in characterizing nature of payment : –

Given the various new models that have arisen in e-commerce, it is difficult to decide, whether the payment for digital transactions would be characterized as Royalty or Fees for technical services, or business receipts.

b) Difficulty in establishing a nexus between the digital transaction, activity and a taxing jurisdiction : –

c) Difficulty in locating the transaction, activity and identity of the taxpayer : –

In many cases, the non-resident taxpayer can operate a digital business by having multiple layers of subsidiaries in several countries, and they may not be any physical involvement of the taxpayer in the country from where the income is generated. Since, digital transactions occur in one jurisdiction, without any physical involvement of taxpayer in another jurisdiction, it is difficult to locate the transaction trail and identify the taxpayer.

The OECD, under Action Plan 1 of BEPS has provided that countries can take the following approach to prevent erosion of their tax base.

Introduction of concept of virtual PE –

Considering the potential of new digital economy, and the rapidly evolving nature of business operations, it is  essential that countries take necessary steps to address the challenges which arise relating to   taxation of digital transactions. In order to address these challenges, a new Chapter titled “Equalization Levy” was inserted by the Finance Act, 2016, to provide for an Equalization Levy for specified digital services. CBDT issued a notification No. 38/2016, dated 27-05-2016 to enforce equalisation levy rules with effect from June 1, 2016 …Read more