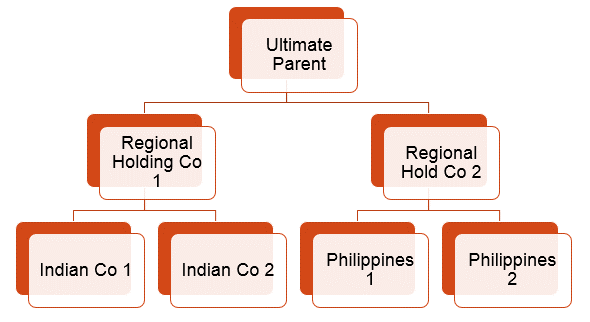 OBJECTIVES OF COUNTRY BY COUNTRY REPORTING

The key objectives of the Country by Country Reporting (CbCR) are as under: –

BACKGROUND OF COUNTRY BY COUNTRY REPORTING

Three-tiered structure of documentation as mandated by BEPS consists of : –

International group shall maintain information and documents in Master file when – 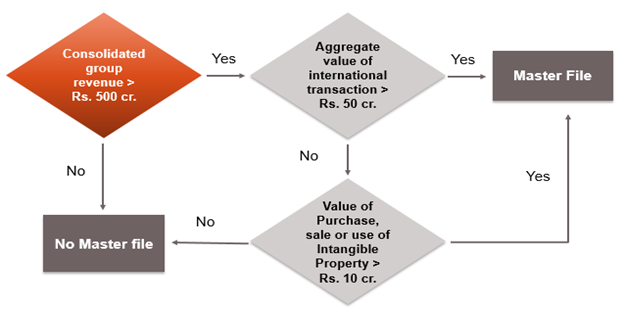 MANNER OF FILING OF MASTER FILE : –

a) Form 3CEAA for Master file :

The information of international group shall be furnished in master file in Form 3CEAA. Such form consists of two parts –

b) Form 3CEAB for intimation :

MANNER OF FILING OF MASTER FILE

SUBJECT TO PROVISION OF FINANCE BILL 2018

As per Rule 10DB,  where the consolidated group revenue of international group exceeds Rs 5500 crores for filing of Country-by-Country report.

Indian entity, having a parent entity resident outside India, will be required to provide information on or before the prescribed date in Form 3CEAC :-

MANNER AND DUE DATE OF FILING OF COUNTRY-BY-COUNTRY REPORT 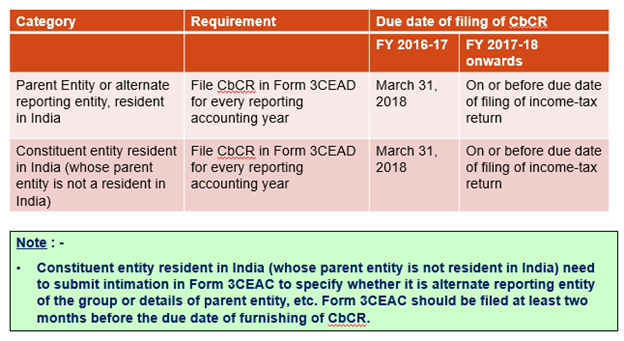 a) A resident constituent entity of an International group shall be required to furnish CbC report to the prescribed authority, if the parent entity of the group is resident :

b) In case where more than one Indian resident entities are constituents of international group, the report shall be furnished by the entity, which is nominated by the international group (provided information of such nomination has been conveyed to prescribed authority in writing on behalf of the group).

PENALTY FOR NON-FURNISHING OF REPORT : –

Where an entity which is required to furnish report under CbC provisions, fails to do so within the prescribed time, penalty shall be payable –

PENALTY FOR FAILURE TO PRODUCE INFORMATION AND DOCUMENTS: –

In case information called by prescribed authority for determination of accuracy of CbC report is not submitted within the time specified in the notice, reporting entity shall be penalized by Rs 5,000/- per day after expiry of the period specified in such notice.

Further, for any default that continues even after service of order levying penalty, then penalty for default beyond date of service of penalty order shall be Rs 50,000/- per day

PENALTY FOR FILING OF INACCURATE INFORMATION IN CBC REPORT

If an entity has provided any inaccurate information in the CbC report, penalty would be Rs. 500,000/- if

Section 273B provides for non-levy of penalty u/s 271GB if the assessee proves that there was reasonable cause for such failure.

MAINTENANCE AND FURNISHING OF MASTER FILE

Penalty for non-furnishing of information and documents to the prescribed authority u/s 286(1) shall be Rs. 5,00,000.

It means any group that includes,

“Group” includes a parent entity and all the entities in respect of which, for the reason of ownership or control, a consolidated financial statement for financial reporting purposes,

“Consolidated Financial Statement” means the financial statement of an international group in which the assets, liabilities, income, expenses and cash flows of the parent entity and the constituent entities are presented as those of a single economic entity.