Controlled Foreign Corporation, as the name suggests, is a foreign corporation, which is incorporated in a low tax jurisdiction and are controlled by a person (individual, company or together by both of them) who is a tax resident of a higher tax rate jurisdiction.

CFC Regulations typically provides for taxation of certain income (generally passive income like interest, dividend etc) as income of resident shareholder, which are artificially transferred to an entity in another jurisdiction (CFC) in the year of its accrual, irrespective of whether it is distributed as dividend or not to the parent company.

Since every corporate entity is treated as a separate legal entity, the profits earned by such CFCs are not taxed in the hands of the resident shareholders, until they are distributed, resulting in tax deferral in the Parent State.

The International Bureau of Fiscal Documentation has explained CFC legislations as under : –

“The term is generally used in the context of tax avoidance rules designed to combat the diversion by resident taxpayers of income to companies they control and which are typically resident in countries imposing low-or-no taxation. Under these rules income of the controlled company is typically either deemed to be realized directly by the shareholders or deemed to be distributed to them by way of dividend. Often only part of the controlled company’s income is dealt with in this way, typically passive income such as dividends, interest and royalties (tainted income). Many but not all controlled foreign company regimes apply only to corporate shareholders.”

In India, the concept of CFC was proposed to be introduced in Direct Taxes Code Bill 2010 (“DTC 2010”), but it is yet to be enacted into law. Under the provision of the DTC 2010 proposal, income of the resident shall include the attributable income of CFC. Any subsequent actual distribution by CFC was deductible for resident shareholder. 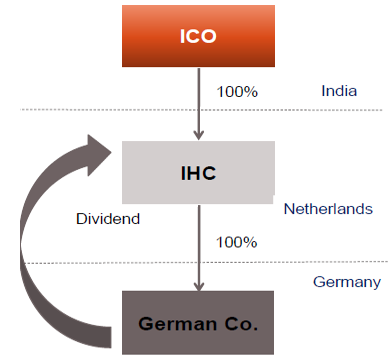 Many countries, including India, follow the “Resident rule of taxation”, wherein, if a person is a tax resident of India, their global income is subject to tax in India (country of residence). These taxation are triggered at the point, when the income accrues or is received by the resident.

In the earlier example, the income accrues to ICO, when the German Co. declares dividend. Secondly, if the German Co also pays royalty, and it is received by ICO, it shall be taxable.

In order to defer/avoid taxes in India in the above case, many taxpayers set up corporations outside India (resident state) in a jurisdiction (Netherlands) which would levy no tax or lower tax on the foreign sourced incomes (Refer Case 2). In this case, if the German Co. declares dividend, it would be exempt from tax in Netherlands as there is no tax on dividend in Netherlands under their local laws/ under European Union Directives. Secondly, if the German Co pays royalty, there would be no tax in Netherlands, as these may be exempt under the European Union regulations, relating to free movement of income in EU without any taxation.

In the above example, if the CFC provisions are present in the domestic taxation system of the parent’s Country of Residence (India) and if the Netherland Co, qualifies as a CFC, parent company would be liable to pay tax on certain passive income of Netherland Co., even though these are not accrued/remitted to the parent’s jurisdiction.

Some countries may provide for a levy of penalty for concealment of income, in cases where the income is kept in a CFC, and not repatriated to the Country of Residence.

Under the Indian law, the power to make laws for the Parliament, and  the Legislatures of States are as under : –

If the   CFC Rules are brought into legislature, the intention would be to protect the Indian tax base, in respect of income that has nexus with India. In such a case, any provision in Income Tax Act, 1961 cannot be regarded as unconstitutional, merely because it has extra territorial operation.

WHAT IS THE CRITERION TO ASCERTAIN WHETHER AN ENTITY WOULD QUALIFY AS A CONTROLLED FOREIGN CORPORATION ?

The degree of control exercised over a particular corporation, would result in such organization being classified, as a CFC (“IHC” in the example). A foreign entity would be regarded as Controlled Foreign Company, if all the following conditions are fulfilled : –

In order to qualify as being engaged in active trade or business , a CFC has to satisfy the following two cumulative conditions : –

ICO, an Indian company is evaluating whether, IHC, a company incorporated in Netherlands is a CFC. The income of CFC is given as under. You are required to confirm if IHC would qualify as a CFC of ICO ?

Since Passive Income > 50%, IHC is a CFC of ICO, assuming other tests are satisfied

Since Passive Income < 50%, IHC is not a CFC of ICO, assuming other tests are satisfied

Control, in general, for the purpose of CFC may have different parlance in different countries. Control is generally said to exist if there is a control over voting power, to influence the business of a CFC, and/or simply having a significant stake in the CFC’s assets, profits or liquidation proceeds (i.e., controlling ownership). However, the most common criterion, where a control is said to exist in the case of CFC are as under : –

a) More than 50% equity or voting power

Many countries consider a company as a CFC of another person, when a particular company or group of companies, along with individuals, owns equity or have voting power, directly or indirectly, in excess of 50% in the other company.

Some countries, deem that even a control of less than 50% of equity or voting power may be sufficient to possess the ability to reduce the overall tax liability of the company. In these cases, even when a particular company owns equity or has voting power, directly or indirectly, equal to or less than 50%, control is deemed to exist so as to constitute one company as a CFC of the other.

WHETHER CFC EXIST IN THE FOLLOWING CASES ? 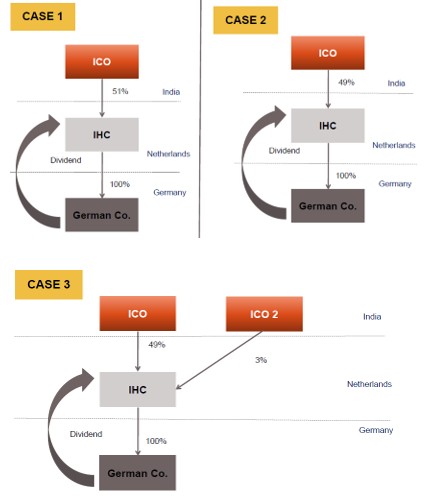 Case I  – Yes, since ICO, individually   owns 51% or more voting power in IHC

Case II  – No, since ICO, individually does not own 51% or more voting power in IHC

WHEN AND HOW IS THE CONTROLLED FOREIGN CORPORATION INCOME TAXED ?

If a company is identified as a CFC, some of its income is taxed in the hands of its parent, as income of the parent or assuming  it were remitted to the parent, even though there is no actual remittance. Income of a CFC can be taxed based on various criterions, such as location specific entities, specific income of residents of a country :-

i. Income from a specific location

In such cases, income of a foreign corporation, residing in a particular country or a location is classified as a CFC income.

While applying this approach, low tax rate in a country, should not be the sole criterion. One should further evaluate the taxation system of the country, existence of KYC norms, willingness to exchange information of assets/investments made by residents /citizens of the country making the requisition.

In such cases, the following additional criterions may further be applied, before the entities are classified into a particular category : –

CFC provision may result in taxing the foreign income abroad, as well as country of residence. To mitigate this effect, most countries with CFC rules allow the following provisions to mitigate the effect of the CFC provisions : –

In cases where the income is taxed both in Netherlands (being the recipient) and parent’s jurisdiction (India), relief from double taxation may be available, subject to DTAA between Germany and India. Where  there is no DTAA between the Payor Country and Country of residence (India), unilateral relief may be available as per the domestic tax laws of Country of residence (India).