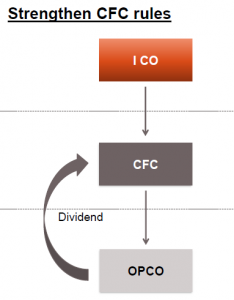 In certain cases, taxpayers who have controlling interest in a foreign subsidiary, can use intermediary companies (referred to as a “Controlled Foreign Corporation” or “CFC”) to reduce or defer the tax base of their country of residence, by shifting/retaining their income into a CFC jurisdiction.

Since a shareholder in Home Country (ICO) is not taxed on the corporation’s income until it is distributed as a dividend, it results in deferral of income

The Action Plan on Base Erosion and Profit Shifting recommended, creation of six building blocks for the design of effective CFC rules. The same are as follows :-

While these recommendations are not minimum standards, they are designed to create rules that effectively prevent taxpayers from shifting income into foreign subsidiaries.

ACTION PLAN – 4 – INTEREST DEDUCTIONS AND OTHER FINANCIAL P A YMENTS

Multinational groups can reduce their taxes in source countries by changing debt levels of individual group entities, via intra-group financing through use of financial instruments, which are interest deductible and escape restrictions on interest deductibility (example, compulsorily Convertible Debentures).

To address these risks, the report analyses several best practices and recommends various

In India, the above approach has been adopted by insertion of  Section 94B by the Finance Act, 2017. Section

94B provides that interest expenses paid by an Indian company or a Permanent establishment (“PE”) of a foreign company in India to its Associated Enterprises shall be restricted to 30 percent of its earnings before interest, taxes, depreciation and amortization (EBITDA) or interest paid or payable to Associated Enterprise, whichever is less. The disallowed portion of the interest expense will be allowed to be carried forward to eight assessment years immediately succeeding the assessment year for which the disallowance was first made.

To help students at Home, we are providing 2 month free access to our entire International Tax Course. For user ID and password, please fill the contact details here