LLM Bank Ltd. carrying on banking business is incorporated in Melbourne, Australia. It has branches in different countries including India. During   financial year 2018-19, the Indian branch of the bank paid interest of ₹ 20 lakhs and ₹ 15 lakhs, respectively, to its head office in Melbourne,  and to the branch office in California. State with reasons whether interest so paid shall be liable to tax in India in the hands of head office and California branch ?

As per Explanation to Section 9(1)(v) of the IT Act, interest payable by Indian PE of foreign bank would be deemed to accrue or arise in India if recipient is : –

In this case, the Indian branch, being a fixed place of business, shall be treated as the PE of LLM Bank Ltd. in India

Accordingly,  interest of Rs 20 lakhs paid by Indian branch of LLM Bank [‘being PE of foreign bank LLM] to its head office in Melbourne,  and Rs. 15 lakhs paid to the other branch office in California shall be deemed to accrue or arise in India. Accordingly, such interest income shall be taxable in the hands of Head office and California branch, respectively, in addition to any income attributable to the PE in India.

As per agreement between S Limited, a company incorporated in Korea and Bharti Motors Limited, an Indian company, S limited rendered both off-shore and on-shore technical services to Bharti Motors Limited for setting up a car manufacturing plant in Gujarat. S Limited rendered off-shore services and on-shore services at a fee of Rs 2 crore and Rs 3 crore, respectively. S Limited claims that it is not liable to tax in India in respect of fee of Rs 2 crore as it is for rendering services outside India. Is the view taken by S Limited correct ?

In this case, the foreign company has rendered technical services to Bharti Motors for setting up a Car manufacturing plant in Gujarat. Thus,  such services are utilized for purpose of business of Bharti Motors in India . Accordingly, service fee of Rs 2 crore shall be deemed to accrue or arise in India and includible in the total income of JJ Ltd.

Thus, S Ltd. is not correct in holding that it is not liable to tax in India for fee of Rs 2 crores as it is rendering services outside India . This position shall be subject to the beneficial provision of the Treaty between India and Korea

Peeyush, a Non-Resident Indian returned to India on 12th June, 2018 for permanently residing in India after a stay of about 20 years in U.K., provides the sources of his various income and seeks your opinion to know about his liability to income tax thereon in India in assessment year 2019-20 : –

i.Income of rent of the flat in London which was deposited in a bank there. The flat was given on rent by him after his return to India since July, 2018.

ii.Dividends on the shares of three German Companies which are being collected in a bank account in London. He proposes to keep the dividend on shares in London with the permission of the Reserve Bank of India.

As per Section 6(1), an individual is said to be resident in India in any previous year, if he satisfies any one of the following basic conditions : –

a)He has been in India during the previous year for a total period of 182 days or more; or

A person is said to be RESIDENT AND ORDINARILY RESIDENT if he satisfies both the additional conditions specified under section 6(6).

CONDITION I : – Individual has been resident in India in 2 out of 10 previous years immediately

CONDITION II : – Individual has during the 7 previous years preceding the relevant previous year been in India for a period of 730 days or more.

However, in the present case, Peeyush never came to India in last 20 years and accordingly,  he was a non-resident in nine out of ten previous years preceding P.Y.2018-19 , and his stay in India during the seven previous years is less than 730 days. Thus, he is Resident but Not Ordinarily Resident .

As per section 5(1), an assessee who is resident but not ordinarily resident would be liable pay tax only on income received / deemed to be received in India , accruing or arising / deem to accrue or arise in India . He is not liable to pay tax on income which accrues or arises outside India, unless it is derived from a business controlled in, or a profession set up in, India.

ii. In this case, dividend is also collected (received) in a bank account in London. As, such dividend income is accrued and received outside India and  it shall not be included in the income of Peeyush

iv. Capital gains from sale of shares would be taxable in the year in which such shares are sold . At the time of sale of shares, Peeyush was non-resident, and accordingly, such gains shall not be taxable in India in that year . No taxability would arise in current FY 2018-19 due to repatriation of sale proceeds when shares were sold in preceding years .

David, a foreign national and a cricketer came to India as a member of Australian cricket team in the year ended 31st March, 2019. He received ₹ 5 lakhs for participation in matches in India. He also received ₹ 1 lakh for an advertisement of a product on TV. He contributed articles in a newspaper for which he received ₹ 10,000. When he stayed in India, he also won a prize of ₹ 10,000 from horse racing in Mumbai. He has no other income in India during the year.

As per section 115BBA, following incomes of non-resident sportsman (including an athlete), who is a foreign citizen are taxable at 20%:

Computation of tax liability of David for the A.Y.2019-20 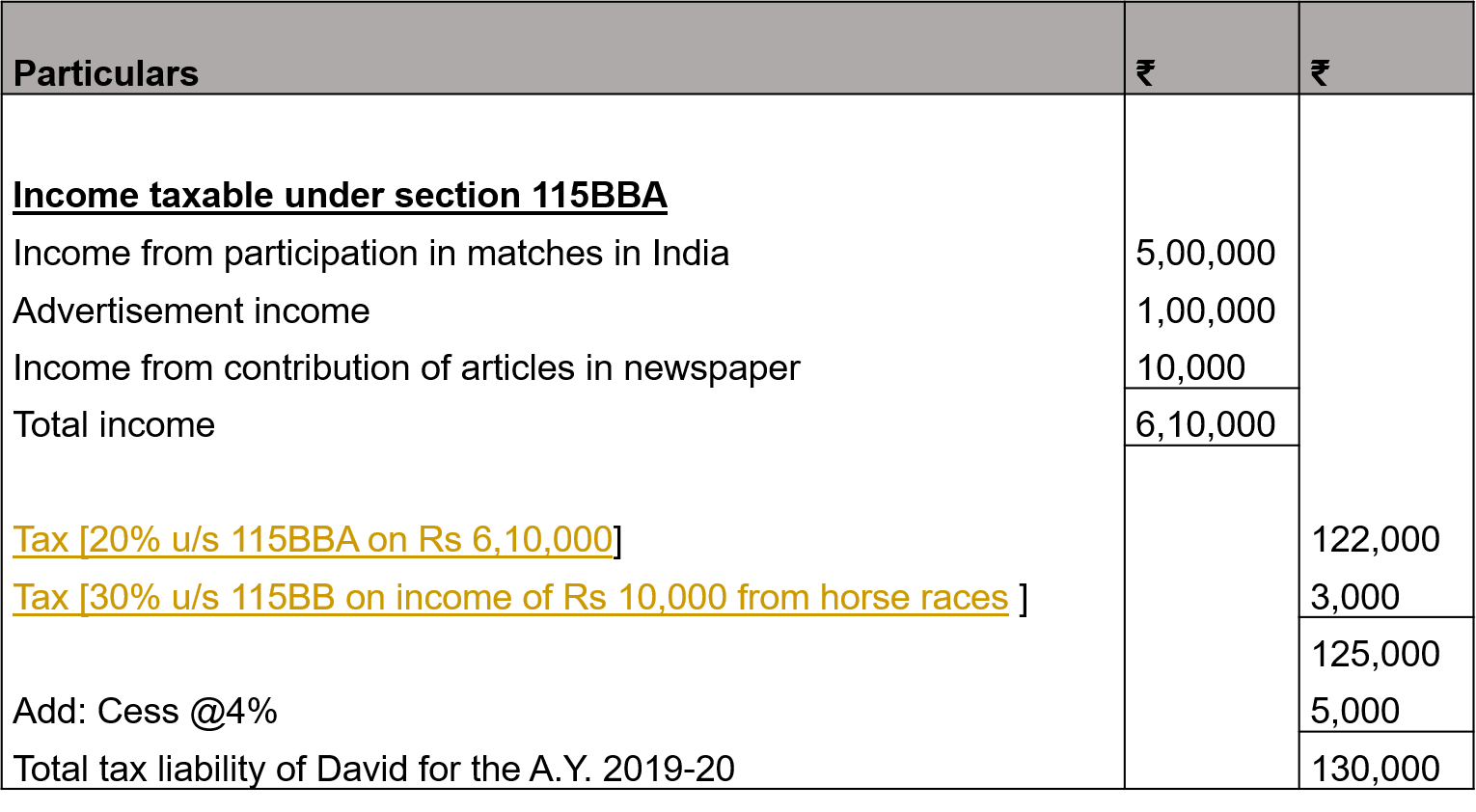 However, in this case, Mr. David has earned income from horse races as well. Therefore, he cannot avail the benefit of such exemption from filing of return of income. Accordingly, Mr. David shall be required to file his return of income for A.Y.2019-20.

(iv)  In case of Indcom v. CIT (TDS) (2011) 335 ITR 485, the Calcutta High Court has held that   ,payments made to umpires or match referees do not come within purview of section 115BBA   because umpires and match referee are neither sportsmen (including an athlete) nor are they   non-resident sports association or institution so as to attract provisions contained in section   115BBA and, therefore, liability to deduct tax at source under section 194E does not arise.

Thus, on the basis of aforesaid ruling, we can conclude that payment to non-resident match   referee are not covered under section 194E, thus, they shall be subject to the normal rates of tax .

Computation of tax liability when Mr. David is a match referee for AY 2019-20

A company shall be said to be engaged in ‘Active Business Outside India’ for the purpose of POEM,  if amongst other conditions, less than 50% of its total asset are situated in India. From the following Balance Sheet, compute the value of the asset : –

50% of the Plant and Machinery were purchased on the last date of the FY and depreciation has been claimed thereon assuming they were used for less than 180 days ?

The  value of the assets , for the purpose of test of POEM for different categories of asset has to be calculated as under : –

In view of the above provisions,  the value is calculated as under : –

XYZ BV, a company based out of Netherlands, executed certain infrastructure projects in India from 2014 – 2019. It had been filing its income tax return as a non-resident, due to which the beneficial provision of the Treaty results in payment of Nil tax by XYZ BV. The Assessing Officer having jurisdiction over XYZ BV came to know on 30.3.2019 , that all the projects of XYZ BV were ending on 31.3.2019, but was of the opinion that XYZ BV had a place of effective management in India. AO accordingly issued notice to XYZ BV on 30.3.2019, asking  it to show Cause as to why it should not be treated as a Tax resident of India, given that its POEM is in India. When would such a notice be a valid notice ?

In order to ensure that the POEM provisions are not misused by the tax office, and are not applied in each and every case, the AO shall, seek prior approval of Principal Commissioner or Commissioner  before initiating any proceedings for holding a foreign company as resident in India on the basis of its POEM.

In the present case, if the AO has not obtained prior approval, the issue of notice would  be invalid.

Joseph Clarke, an Australian resident,  worked in India on a construction Project, which constituted a PE of the employer in India. For the India work where he was present for 160 days and he earned a taxable salary of Rs. 24,00,000. Based on the following provision of India Australia Treaty, examine the taxability of salary earned by him under all options, if more than one ? Also examine, if TDS has to be withheld on such salary payment ?

Section 9(1)(ii) of the IT Act, provides that if a non-resident individual has certain income , which is taxable under the head “Salaries”, it shall be deemed to accrue or arise in India, if it is earned in India.

Salary income would be treated as earned in India if it is payable for services rendered in India. Thus , salary earned by Joseph Clarke would be liable to tax in India as per the IT Act . However, given that he is a resident of Australia,  he can opt to be governed by the provisions of India- Australia treaty,  in case they are  more beneficial  .

– the remuneration is paid by, or on behalf of, an employer who is not a resident of that other State –  This condition is satisfied as Payor is a non-resident ; and

– the remuneration is not deductible in determining taxable profits of a permanent establishment or a fixed base which the employer has in that other State.

In the present case, while condition 1 and 2 are clearly satisfied  , we do not know whether the PE of  the employer has  claimed a deduction in respect of such salary. Therefore  the following two situations may arise : –

The income  will be taxable   in  India, since all the conditions to claim the exemption has not been satisfied. In view of this, TDS has to be withheld on such salary payment

The income  will be taxable only in Australia. Since the income is not taxable in India, no TDS has to be withheld from such salary payment

Compute the exemption u/s 10, if any , assuming both the agreement were entered into  on 31-3-2007 and approved by the Indian Government?

Sunio Japan, is a global company, which has subsidiaries in various countries. Five of its subsidiaries , hold 100% share capital of Sunio India, which were acquired by them at various cost over the years. The group undertook Corporate restructurings in FY 2018-19, wherein certain group reorganizations were carried out. The relevant details are as under (all amounts are in Rs. Crores) : –

Examine the tax implications in above Corporate Restructuring, from an India Tax Perspective  ?

c.Transfer of shares of Sunio Malaysia , which is a subsidiary of Sunio China,  to Sunio Pty Singapore  in scheme of merger would result in transfer of shares of Sunio India held by Sunio Malaysia. Section 47(viab) provides that any transfer, of a capital asset, being share of a foreign company (referred to in Explanation 5 to section 9(1)(i)), which derives, directly or indirectly, its value substantially from the share or shares of an Indian company, which are held by the amalgamating foreign company (Sunio China ),  to the amalgamated foreign company  (Sunio Pty Singapore  ) in a scheme of amalgamation, shall not be regarded as transfer, provided the following conditions are satisfied : –

Such transaction would be liable to capital gains tax in India.

of an Indian Company, MNO Ltd, which were issued in accordance with the notified scheme of the Central Government, in foreign currency.  During FY 2018-19, he sold part of the GDRs to an eligible NR outside India and remaining to Mr. Chaman, a ROR.  Compute the capital gains tax on such sale ?