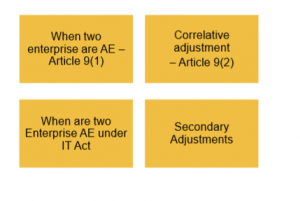 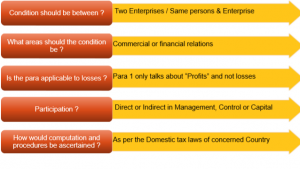 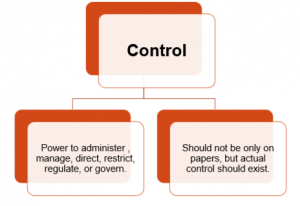 CASE 1 – SALES AT MORE THAN ALP

Where a Contracting State (INDIA) includes in the profits of an enterprise of that State, and taxes accordingly, profits on which an enterprise of the other Contracting State has been charged to tax in that other State,
and the profits so included are profits which would have accrued to the enterprise of the first-mentioned State (INDIA) if the conditions made between the two enterprises had been those which would have been made between independent enterprises,
then that other State (USA) shall make an appropriate adjustment to the amount of the tax charged therein on those profits.
In determining such adjustment, due regard shall be had to the other provisions of this Convention and the competent authorities of the Contracting States shall, if necessary, consult each other. 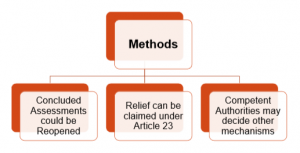 ASSOCIATED ENTERPRISES AS PER PROVISION OF IT ACT

GUARANTEE OF NOT LESS THAN 10% OF TOTAL BORROWINGS

KNOW HOW ETC. USED IN MANUFACTURE OR PROCESSING OF GOODS OR ARTICLES

PRICE INFLUENCED BY PURCHASERS OF ARTICLE

OWNERSHIP OF MORE THAN 10% IN FIRM/AOP/BOI